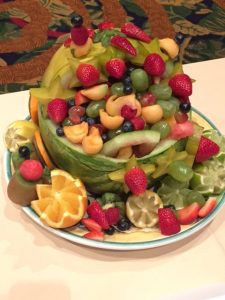 a colorful bounty of fruit in a watermelon bowl. photo by Karen Kuzsel

“Add a pinch of this. A dash of that. Smell it. Taste it.” That’s how Mom taught me to cook the family’s dinners when I was 12. Baking lessons began earlier. I made my first totally-from-scratch apple pie when I was five. Standing elbow-to-elbow on my stool, clad in the frilly apron my aunt had hand-stitched (and which I still occasionally wear), I replicated her every step in my own tart tin. We worked the dough to the right elastic consistency, rolled it out, and filled our pie pans with sliced apples moist from lemon, sugar, cinnamon and raisins. By 12 my mother returned to the daily workforce and I became responsible for the evening meal. I planned the menu around favorite dishes at which my mom excelled. Her phone call directions stipulated boiled, baked or roasted, at what temperature and for roughly how long.  The pinches and dashes were up to me.
None of the passion, curiosity or creativity learned from my family of former restaurateurs prepared me for the business side of being in the restaurant industry. If I’d had the culinary foundation that 90,000 high school students in more than 1,700 schools in 47 states have available to them through a two-year nationwide program called ProStart, I may not have run screaming into the night when the stresses of an international catering business I co-owned drowned me in virtual hot sauce.  According to ProStart statistics, five years after earning their Certificate of Achievement, 81% of students are still studying and/or working in the foodservice industry. Of the students who compete in the National ProStart Invitational, 78% are likewise engaged.

I was overwhelmed by the talent, creativity and skill level demonstrated by my category’s high schoolers clad in their required press white chef’s jackets. The air in the room crackled with anticipation. Students not competing at that moment pressed against the roped off areas, cheering on team mates when a green onion was skillfully mastered into a blooming flower or a melon was carved in bas relief.
As the interviewer for the Edible Centerpieces (and no, they aren’t meant to be actually eaten), I asked for the nutritional value of their chosen ingredients, were the ingredients imported or available locally, and what was the inspiration and process behind their centerpiece. There was a team of at least a dozen other judges for Edible Centerpieces. Professional chefs Post-Secondary Education instructors assessed cleanliness, preparation, if they followed the strict rules for what ingredients could be used, and design. Others ensured contestant’s paperwork was in order, monitored their mandated hour start and stop times, and made sure all the score sheets were gathered before the entrant was permitted to pick up their display tray and move it to a table for public viewing. I admit my sense of marvel at their ingenuity was at war with my envy of their education.
“They are our future. This competition is a great way to invest in our young culinary students,” described Michael Bersell, Chef de Cuisine for Disney’s Grand Floridian Resort & Spa and a final presentation judge for Edible Centerpieces. “They’re being trained to take old-school techniques, such as turning a carrot into a palm tree, and re-invent them with modern ingredients and ideas.”

John Maxwell, CEC, CCE, AAC, MBA is the Director of The International Culinary School at the Art Institute of Jacksonville. When he began his career in 1961 there were “only two culinary schools you could attend, one of them being Johnson & Wales University (the Universal Sponsor for this 12th state competition).  There was no consistency in skills taught. You can see how the level of education has improved because the quality of food, preparation and knife skills formerly found in fine dining restaurants, are now evident in mid-level restaurants.” 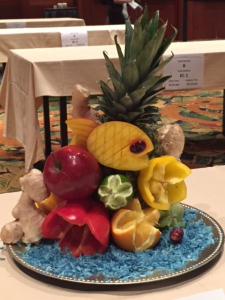 Maxwell says his reputation now rests on the quality of his students. In the early stages of a chef’s career, “everyone wants to know who taught you? In mid-career, it’s ‘what have you done.’ Now, it’s who have I mentored?” says the frequent ProStart competition judge.
I didn’t have a chance to watch the Gourmet Meals preparations and the Waiter Relays were held after I’d left. In that competition, teams raced against the clock to create French, American and Russian table settings. They demonstrated candlestick, tulip and pyramid napkin folds. Penalty minutes were added to the score for such things as incorrectly placing a knife. The team with the fastest time won.

Between my rounds of judging, I examined the poster board presentations for the management category,. School teams created new restaurant concepts, from the décor, uniforms, seating, menu, and pricing. Some menus were totally original; others were twists on recipes appropriate to the theme or ethnicity. What I found even more stimulating than the colorful swatches of fabric or salivating descriptions of dishes was the friendly assertiveness, professional attire and charming demeanor of the team members. They were welcoming, informative, and enthusiastic. When Top Chef holds its Restaurant Wars, some of the front-of-house contestants could take a few pointers from these students.

Here are a few I found intriguing.
University HS in Orange City is a new school with a new program, but that didn’t deter their team from creating Zydeco, a New Orleans fine dining concept, with dishes both classic and spicy.
One of the more intricate displays was Mia Koda, which means Power of the Moon. The team from East Ridge HS in Clermont described their cuisine as Native American with a trend toward healthy, locally-sourced products.

Wharton HS in Tampa took food trucks to an elevated level.  Pearl, “serving Seafood—the flavor of life” takes a cue from Transformers. It would be a shipping crate that converts to a full, fixed restaurant within two minutes. The mobile restaurant would take up six parking spaces and cost $250,000 to build, and they had photos and stats from one of two companies in the world who is actually producing these mobile restaurants.

And then there were the lovely ladies of Tarpon Springs HS in their matching black-and-white dresses who spoke eloquently of Heirloom, their take on rustic chic. Their concept was to convert an old estate into a fine dining establishment with a farm-to-table menu enhanced by modern twists.  If their chilled pumpkin soup and corn hummus with endive shooters were available to sample, I’d have been first in line.
he value of ProStart begins with an “entry-level two-year program that teaches front and back of the house,” says Laura Rumer, Director of School-to-Career Programs for the Florida Restaurant & Lodging Association Educational Foundation. “ProStart has created more of an interest in the restaurant and foodservice industries as a career. Cooking is the sizzle that gets them hooked. Then they personally choose which area to focus on,” says Rumer, who has watched the level of excellence raised each year since she began with the program in 1998.

The Florida Restaurant and Lodging Association’s Educational Foundation is the only Florida organizations that offers the ProStart program. ProStart does more than train and host competitions. Each year, $820,000 in scholarships is awarded to the post-secondary school that the winners in the top three of each category chooses to attend.

All photos by Karen Kuzsel.
Karen Kuzsel is a writer-editor based in the Orlando area who specializes in the hospitality, entertainment, meetings & events industries.  She is a Contributing Editor-Writer for Prevue Magazine and is an active member of ISES and MPI, for which she is on the Membership Advisory Council and the Industry Advisory Council. She writes about food & wine, spas, destinations, venues, meetings & events. A career journalist, Karen has owned magazines, written for newspapers, trade publications, radio and TV. As her alter-ego, Natasha, The Psychic Lady, she is a featured entertainer for corporate and social events. karenkuzsel@earthlink.net; www.ThePsychicLady.com

HOTEL HAPPENINGS: Out with the Old, In with the New St. Kitts: a Caribbean treasure ripe for discovery
Scroll to top