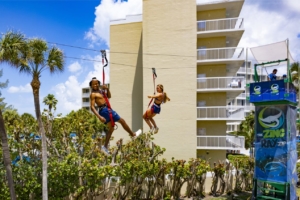 You might say that TradeWinds Island Resorts is zipping along. After all, the St. Petersburg, FL resorts, which includes the Island Grand and RumFish Beach Resort, have added 141 guestrooms, new zip line on the beach, and a new Mexican restaurant concept at the Island Grand. The 141 rooms were part of the property formerly known as the Alden Suites, which was acquired by TradeWinds last March and incorporated into the RumFish Beach Resort. The expansion brings the RumFish Beach Resort room count to 353, for a total of 899 guest rooms at TradeWinds Island Resorts. The 141 newly renovated, all-suite guestrooms include Gulf front and resort view villas, as well as seven, two-bedroom villa lanais. The expansion also added two pools, covered spa area, and a beachfront bar, accessible by guests at both TradeWinds properties. TradeWinds has also added the new Zing Ray Zip, making them the first-ever St. Pete Beach resort with a three-story, dual-line zipline on the beach. Resort guests can enjoy unlimited rides that soar above the beach. Coming this summer, the Aqua-Bana, a 10-person covered floating cabana complete with a table and a cooler of ice. The resort has added new components to the popular Floating Water Park, including a new water slide, catapult swing and monkey bar apparatus. At the Island Grand, the lively new Bermudas Beachside Cantina is an eclectic Mexican restaurant and bar. he TradeWinds Island Resorts are located directly on 40 acres of sugary white sands of the Gulf of Mexico. 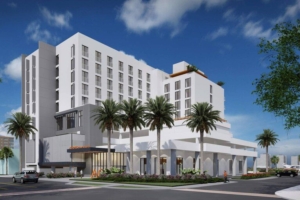 AC Hotel Clearwater Beach, a 144-room, lifestyle-branded Marriott portfolio property, opens this summer according to Raleigh, NC-based Concord Hospitality Enterprises. Framed by the shores of the Gulf of Mexico and Intracoastal Waterway, expect great water views from guest rooms and Soriée, a rooftop gathering space. A chic European-inspired brand, AC by Marriott properties are designed with the modern traveler in mind, who is seeking an experience-driven atmosphere. Onsite, the AC Kitchen and AC Lounge will serve European-inspired breakfast and tapas-style dining. There’s a library-focused workspace, resort-style pool with Umbra pool deck bar for lite bites and drinks, Media Salon for up meetings up to six, and 24-hour fitness center.

A $21-million expansion will pay for 51 new guest rooms and suites to add to the current 137-rooms, private lobby, meeting space, and a rooftop terrace for the award-winning Epicurean Hotel (Tampa, FL). The four-story structure will incorporate two restored historic apartment buildings and add two floors of parking with 91 spaces. The expansion is scheduled for completion in the summer of 2023. “Together, Bern’s Steak House, Haven and Epicurean Hotel have turned South Howard into a true culinary destination, and this new addition will elevate our streetscape to match it,” said Joe Collier, President and Founder, Mainsail Lodging & Development. Calling it Epicurean’s “second course,” Collier said the overall look and feel of guest rooms, meeting rooms and public spaces will be consistent with the main hotel, but that the expansion gives them an opportunity for innovation and refinement. Public areas will feature a welcoming contrast of warm woods with cool concrete and stainless steel. An original artwork installation of wine and champagne corks, and a contemporary liquor bottle chandelier will greet arriving guests in the lobby. In addition to the new 31 standard king rooms, eight deluxe king rooms, three two-room suites, and one junior suite, there will be eight historical apartments converted into apartment-style suites with private balconies. Guest rooms and suites will feature signature butcher block counter tops and soft, sophisticated, earth-toned furnishings and finishes, with a dash of culinary-themed touches in the artwork and other decor. Improved technology will also enhance the overall guest experience. New meeting space will include a 794-sf room accommodating up to 50 guests, and a 590-sf room ideal for up to 39 guests. The 1,138-sf rooftop terrace will also provide a unique option for private events and meetings for up to 130 people, with 44 seated guests. Orlando-based L2 Studios, Inc. is the architect and interior designer for the project. Additional partners include Cooper Johnson Smith Peterson Architects, Inc. for the exterior concept design, and Nelson Construction, the general contractor, both based in Tampa. 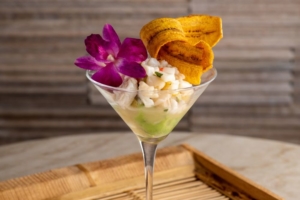 Music may soothe the savage beast but it’s the 1,500 servings of chicken noodle soup by Music City Center (Nashville, TN) in partnership with Sodexo Live! and Nestlé that will fill the stomachs of more than 20 community groups that partner with The Nashville Food Project. Nestlé provided seven cases of base ingredients, and Music City Center provided the other ingredients, as well as bowls and spoons. Thirty-gallon buckets were used to transport the soup. This is the second year for “The Big Soup” collaboration with The Nashville Food Project. Music City Center (MCC) is a 2.1 million sf convention center with more than 353,000 sf of exhibit hall space, two ballrooms, 60 meeting rooms, and a covered parking garage with 1,800 spaces.

Caesars Entertainment has spread its $3.3 million donation to dozens of national and local non-profit organizations through the company’s corporate giving platform, the Caesars Foundation. This year’s recipients include a first-ever partnership with the Boys & Girls Club of America and a donation to Meals on Wheels for the 20th consecutive year. The Caesars Foundation also gave to long time partners Clean the World Foundation, International Center for Responsible Gaming, National Park Trust and others. The gifts focus on organizations that fall into Caesars Entertainment’s core values, including non-profits focusing on responsible gaming, sustainability and diversity, equity and inclusion. Additional groups receiving fund include the Public Education Foundation, Second Wind Dreams, and the Women’s Business Enterprise National Council.
www.caesars.com/corporate.

The Florida Festivals & Events Association (FFEA) Sunsational Awards Committee needs qualified individuals to judge this year’s award entries. Judging is done online anytime between June 20th – 26th. All you need is a computer with internet access. You do not need to be an FFEA member but cannot judge an event if affiliated with that event. These are the areas of expertise needed for judging: Graphic Design, Social Media, Photography, Broadcast Media, Public Relations, Advertising, Event Programming, and Virtual Events.

WalletHub, the personal finance website, reveals the results of two popular summer surveys: where to go for vacation (for United States destinations) and what credit cards are used for the maximum benefit. WalletHub reports that 58% of Americans indicate that inflation is affecting their travel plans.  For the travel destination question, more than 100 metro areas were assessed across 43 key indicators of budget- and fun-friendliness. The data set ranged from the cost of the cheapest flight to the number of attractions to COVID-19 cases. Interestingly, the Los Angeles, CA metro area is the most attractive destination on the West Coast and the Washington, D.C. metro area on the East Coast. Less surprising is that Florida and Texas score big for top summer destinations. The Wichita, KS metro area has the lowest nightly rate for a three-star hotel room, $36, which is 4.6 times less expensive than Santa Rosa, CA. Without further delay, from the number one spot (Orlando, FL) here are the destinations in descending order. Washington, D.C; Tampa, FL; Austin, TX; Salt Lake City, UT; Los Angeles, CA; Honolulu, HI; Minneapolis, MN; Cincinnati, OH; San Antonio, TX; Miami, FL; Charleston, SC; Raleigh, NC; Jacksonville, FL; Philadelphia, PA; Oklahoma City, OK; Tulsa, OK; Knoxville, TN; San Diego, CA and lastly, St. Louis, MO. WalletHub evaluated credit cards for summer travel, highlighting deals worth $800+ in airfare, hotel reservations etc. “Some people do prioritize vacations over financial obligations like credit card payments, and that group actually seems to be growing. A new WalletHub survey found that 41% more people would skip a credit card payment instead of a vacation this year compared to last year,” said Delaney Simchuk, WalletHub analyst. “After two-plus years of pandemic living, many Americans are clinging to the idea of making up for lost time, and if some interest charges and possibly a late fee are part of the price of making a long-awaited getaway happen, so be it. At least that’s where consumer sentiment seems to be right now.” What are the most and least popular credit card perks? Rental car insurance (27%) is the most used benefit. It’s nearly twice as popular as extended warranties (14%), the least used benefit. The “winner” in 2022 is Capital One Venture Rewards Credit Card because it offers an initial bonus worth $750 in travel, along with double miles on all purchases and a reasonable annual fee.

And WalletHub is not forgetting those who won’t travel for the remainder of 2022 but do want a staycation. The company compared more than 180 cities across 44 key indicators. Their data set ranges from parks per capita to restaurant-meal costs to the share of residents who are vaccinated. Here are some of the highlights. Orlando, FL has the most zoos & aquariums (per square root of population), which is 43.7 times more than in New York, the city with the fewest. However, New York has the most parks (per square root of population), which is 21.8 times more than North Las Vegas, NV. Want to get your house cleaned? Sioux Falls, SD has the lowest cost of house-cleaning services, $60, which is five times less expensive than in Pearl City, HI, the city with the highest at $300. The top 10 best cities for a staycation are Honolulu, HI; Orlando, FL; Chicago, IL; Fort Lauderdale, FL; Portland, ME; Las Vegas, NV; San Francisco, CA; New York, NY; San Diego, CA and Seattle, WA. The bottom 10 begin with Fremont, CA and end with Pearl City, HI. In between are Garland, TX; Irving, TX; Fontana, CA; North Las Vegas, NV; Oxnard, CA; Rancho Cucamonga, CA; Moreno Valley, CA and Chula Vista, CA.

June 10-11: THE ROW’s BBQ, Brews and Blues Festival returns to the streets of downtown Reno, NV. More than 50 microbreweries, free live entertainment, and a new Beer Olympics event. Free live entertainment will include performances by Don Felder (formerly of the Eagles,) Pop 2000 Tour, Buddy Emmer Blues Band, Shane Dwight and Maxx Cabello, Jr. For the Beer Olympics event, participants will put their drinking and physical strength to the test as teams of four compete in different obstacles and challenges for the 25th Annual BBQ, Brews and Blues Beer Olympics Champion title.

Karen Kuzsel is a writer-editor based in the Orlando area who specializes in the hospitality, entertainment, meetings & events industries.  She is an active member of International Live Events Association, Meeting Professionals International and the Society of Professional Journalists. She is now serving on the 20121-2022 MPI Independent and Small Business Owners Advisory Board. Karen writes about food & wine, spas, destinations, venues, meetings & events. A career journalist, she has owned magazines, written for newspapers, trade publications, radio and TV. As her alter-ego, Natasha, The Psychic Lady, she is a featured entertainer for corporate and social events. Karen@KarenKuzsel.com; www.karenkuzsel.com; www.ThePsychicLady.com; @karenkuzsel; @thepsychiclady.