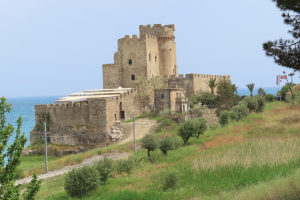 An abandoned castle on the side of the road in Apulia.

In Part 3, we traversed the crooked, uneven narrow roads of Matera’s Sassi area, finding a history steeped in ancient religions, superstitions, and a reluctance even now to live comfortably under the watchful eye of UNESCO and tourism.

Once again, Italy’s unfinished road system causes our bus driver to weave a meandering path along main highways and back roads towards our next destination, the Apulia (or Puglia) region, which forms the heel of Italy’s boot shape. Apulia, which means “land without rain” has a population of about four million. The economy is based on industry and agriculture, with tomatoes the chief moneymaker. Want the best mozzarella and burrata cheeses? Come to Apulia. The region is home to Bari, a port and university town, Lecce (known as the (“Florence of the South”), and Alberobello, home to another type of unique architecture that is a far cry from Matera’s Sassi caves. 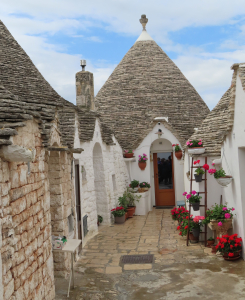 A trulli house in the Aia Piccola.

Alberobello means “beautiful tree” but when you see a whole town of round huts with white-washed and grey conical roofs it seems as if we rode into a hobbit shire. As we learn on this afternoon pause enroute to Lecce, the conical roofed architecture is called trulli. The shape was copied from Cappadocia, Turkey designs built roughly a 1,000 years ago, but which are now embedded in the legend and economy of Alberobello.

Our cheerful local Odysseys Unlimited guide lives in the area, a fact evident by all who greet him as we toured the original Aia Piccola, across the road from the more modern commercial district. There are roughly 1,400 trulli within the city limits, but in the Aia Piccola, 400 original trulli are still owned and protected by about 80 families. In 1996, Alberbello was declared a UNESCO World Heritage site so the original design and white coloring of the homes can’t be altered. Because of its UNESCO sponsorship, many of the homes not owner-occupied are rented out as lodging, but what they cannot be used for are retail businesses. Traffic in the Aia Piccola is minimal. 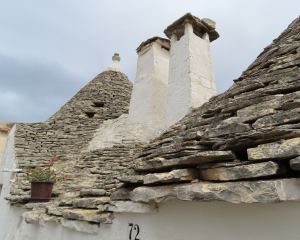 The limestone rocks are laid without mortar that used to fool the King’s taxmen because the stones could easily be removed and restacked.

Like the cave dwellings in Matera’s Sassi, most of the trulli began as a one-room abode for an entire family but as time went on, more cone-shaped rooms were added. In the 1930s, bathrooms first became inside, and the animals were finally put outside. There is the legendary tale of the roofs and then there is the practical side. The tops are layered flat grey limestones. There are cisterns built under each room and the practical side for the design is that water can then be collected and recycled without being trapped in the roof. On top of each trulli is a stone pinnacle. The design of the pinnacle denotes the builder/architect. Legend has it that the limestone rocks were laid without mortar to thwart the efforts of the King of Naples in the 14th century. If he or his collectors came by to inspect permanent structures and affix a tax, they’d simply remove the rocks and claim this was an open structure to house animals. When the King and his men left, the roofs were rapidly restacked. 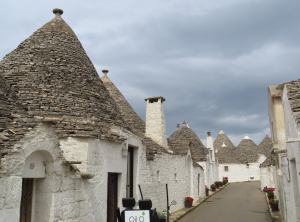 There are 400 authentic trulli houses owned by 80 families in the Aia Piccola.

Each trulli in the Aia Piccola has a small garden out back so a family can be self-sustaining. The one we toured with the current owner had numerous rooms. In another, we met a couple who meticulously supplement their income with the garden produce they grow. Before trulli became trendy, one might have sold for $10,000. Today, they sell for $60,000 to roughly $400,00, depending on the size, condition, and location. Even when we passed out of the immediate city area, we saw the style adopted for newer housing. 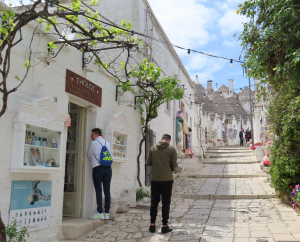 Across the street from the Aia Piccola, trulli stand shoulder-to-shoulder with one another up and down the hilly commercial district. We had little time to shop, but when our fabulous Tour Director Andrea F. asked if anyone wanted to join him for an olive oil and balsamic vinegar tasting at his favorite shop, nary a person didn’t join. We crowded into Gift Idea at via Monte Sabotino, whose owner pointed to awards and certificates around the shop verifying his olive oil has won the best of Europe awards many times. He and his staff generously gave us samples of multiple olive oils, balsamic vinegars (the pomegranate brightened my taste buds), and local crackers. They rapidly wrapped bubble wrap around purchases for air travelers.

There was no doubt that Ristorante Il Poeta Contadino would be a special experience even before we sat for the fine dining multi-course meal. 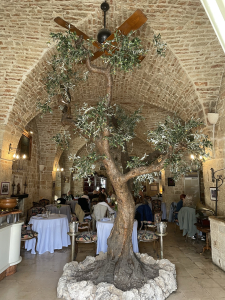 This restaurant takes heavenly dining to new levels. The rustic stone walls that soar into a wide arch or the grand piano in one of the two rooms were not the first signs that this restaurant was going to be special. The first thing you see walking in is a bent living tree of greenish-gray leaves posed as if a tango dancer in a graceful back heel dip within a white rock-circled dirt bed. The cathedral high arched ceiling of fitted bricks fades into two dining rooms, with one hosting a grand piano. 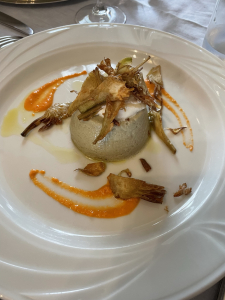 This silky-smooth artichoke flan was topped with crispy slivers of artichoke, surrounded by pureed carrot, was simply amazing.

The obvious attention to detail signaled the same care would apply to the food. It did. The restaurant has three wine cellars naturally climatized with about 25,000 bottles bearing 3300 labels. We didn’t try all the wine (as if!), but the Illivia Primitivo from Puglia was a superb accompaniment to the bold flavors of the food. Full bodied with moderate tannins. Fruit forward. Very similar to a zinfandel.

Our meal began with warm bread and a creamy artichoke flan topped with crispy slivers of artichoke. Forked streaks of pureed carrot and olive oil surrounded it. Next course was a spicy sausage, mushroom, onion, and a light tomato sauce lapping a plate of strascinati pasta (flat irregular circles), popular in Puglia. Of course, there was dessert. This time it was a fantastic almond and cream semifreddo with caramel sauce. You have no idea just how delicious this entire meal was!

In Part 5, we discover that Lecce Baroque is as much an attitude as an architectural style and that certified organic wines go down smoothly with farm-to-table meals.

Karen Kuzsel is a writer-editor based in the Orlando area who specializes in the hospitality, entertainment, meetings & events industries.  She is an active member of International Live Events Association and Meeting Professionals International and is now serving on the 2021-2022 MPI Global Advisory Board for Small Business Owners. She is a member of the Society of Professional Journalists. Karen writes about food & wine, spas, destinations, venues, meetings & events. A career journalist, she has owned magazines, written for newspapers, trade publications, radio and TV. As her alter-ego, Natasha, The Psychic Lady, she is a featured entertainer for corporate and social events. Karen@KarenKuzsel.com; www.KarenKuzsel.com; www.ThePsychicLady.com; @karenkuzsel; @thepsychiclady. Food photos for this series by Karen Kuzsel. All other Photos by Russ Wagner, a retired government planner/builder who has a passion for historic architecture, wine, trains, travel and taking photographs.