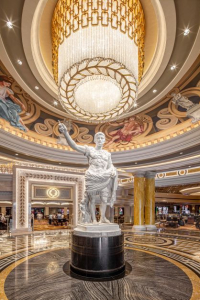 Hi ya’ll. Am prepping my house and yard for Hurricane Ian, so this will be a short update in case we lose power at some point. My blessings to all for safety, especially to those who were just impacted by Fiona and all facing the powerful Ian.

Caesars Palace (Las Vegas, NV) has finished the multi-million-dollar renovation. The front roof the entryway has been coffered and raised. There’s a new porte-cochère, refreshed gaming areas, and the new Galleria Bar is featured prominently in the hotel lobby. A 15-foot-tall Carrara marble statue of Augustus Caesar welcomes visitors under the raised ceiling, which features hand-painted illustrations of Roman gods and a spectacular chandelier containing 70,000 crystals. “Since Caesars Palace opened its doors in 1966, we have been inspired by founder Jay Sarno’s promise to treat every guest like a Caesar,” said Sean McBurney, Caesars Entertainment Regional President. “The extravagant entryway is the first of several new additions to Caesars Palace, with Peter Luger Steakhouse, Dominique Ansel Las Vegas, Stanton Social Prime and more to come soon.” Beyond the entryway and two new state-of-the-art gaming pits is a new, crystal chandelier that weighs approximately 3,200 pounds and is comprised of 12,000 individual crystals. The linear rays that radiate from the chandelier contain approximately 120,000 additional crystals. With more than $1 million in crystals, brighter, energy-efficient LED lighting and reimagined carpet, wall and ceiling coverings, the original domed gaming area has been given a modern twist. The 24 hr/day Galleria Bar in the hotel lobby has 24 seats and 22 multi-game slot machines. The contemporary inspiration of a palatial Italian study has four life-size Venus sculptures and a backdrop of antique mirrors and Italian inlaid wood murals. Sure, there are wines by the glass from the Coravin® wine preservation system but check out some of these signature cocktails. The Branson XO Sidecar, made with Branson XO Cognac, Cointreau, lemon juice, egg whites and a cinnamon sugar rim or the Empress Smash, made with Empress 1908 Gin, Aperol, lemon juice, strawberries and basil. The Queen of Hearts has Casamigos tequila, watermelon purée, lime juice, a pinch of salt, sliced jalapenos and a fresh watermelon wedge while the Wild Orchid is made with Ketel One Oranje Vodka, lemon juice and crème de violette.

September through December: Date change for the Big Bad Voodoo Daddy concert, the final show for the free series, Rockin’ on the River, at the new riverfront Caloosa Sound Amphitheater. Due to a tour date conflict, the concert has rescheduled from Dec. 15 to Dec. 12. All claimed free tickets or purchased VIP tickets for the Dec. 15 date will be honored at the Dec. 12 date. If a ticket holder cannot attend the new date, event organizers ask that the ticket holder cancel their tickets to allow others an opportunity to see the show. If a ticket holder would like a refund on their purchased VIP tickets, they can make a request in the Eventbrite ticketing platform where the ticket(s) was purchased. Located adjacent to Luminary Hotel & Co. in downtown Fort Myers, FL, the series will also feature classic pop rock sounds of Pablo Cruise (Oct. 30); country music legend Lorrie Morgan (Nov. 21).  All shows begin at 7 p.m. General admission is free but must be claimed in advance at CaloosaSoundamp.com. A limited number of $35 VIP tickets will be available and will include a reserved seat directly in front of the stage (within the first five rows), one complimentary drink and access to VIP restrooms. There will be $50 Super VIP tickets, as well, which include an exclusive meet-and-greet with the artist. The result of a unique public/private partnership between Luminary Hotel & Co. and the City of Fort Myers, the Caloosa Sound Amphitheater is expected to draw a mix of residents and visitors downtown. Mainsail Lodging & Development has partnered with Tampa-based marketing agency, Mind Stone Marketing Group, LLC, to provide marketing, sales, booking and consultation services for Caloosa Sound Amphitheater.

Karen Kuzsel is a writer-editor based in the Orlando area who specializes in the hospitality, entertainment, meetings & events industries.  She is an active member of International Live Events Association, Meeting Professionals International and the Society of Professional Journalists. She is now serving on the 2022-2023 MPI Independent and Small Business Owners Advisory Board. Karen writes about food & wine, spas, destinations, venues, meetings & events. A career journalist, she has owned magazines, written for newspapers, trade publications, radio and TV. As her alter-ego, Natasha, The Psychic Lady, she is a featured entertainer for corporate and social events. Karen@KarenKuzsel.com; www.karenkuzsel.com; www.ThePsychicLady.com; @karenkuzsel; @thepsychiclady.