What if you were in the target zone of this shooter?

The headlines have become all too numbingly familiar: mass killings at schools, airports, churches, offices, restaurants, arenas and public streets.

What if fight or flight aren’t your only solutions?

What if you could prepare yourself to spot dangerous behaviors, strategize how you’d narrow the chances of being caught unawares, and might save both yourself and others during unexpected, volatile, life-threatening scenarios?

It’s about understanding behavior patterns and looking at anomalous behavior outside of the normal baseline.   It’s about profiling behavior, not people and identifying behavioral indicators consistent to a potential threatening environment.

All of the above are possible according to two experienced lawmen who addressed the Greater Orlando (FL) chapter of Meeting Professionals International (MPI) luncheon held at the Hyatt Regency Grand Cypress.

Director of Education & Life Safety for the International Association of Venue Managers (IAVM) Mark Herrera’s keynote presentation was aimed at mitigating threats to employees or meeting groups, but the practical information would be as applicable to individuals.

He quickly dispelled the idea the notion that terrorism is only done by a certain ethnic group.

“Sixty terrorist plots have been foiled since 9/11 in the United States. Forty-nine of those were homegrown,” said Herrera, who Co-Chairs Department of Homeland Security (DHS) Commercial Facilities Sub-Sector Coordinating Council with office of Infrastructure Protection through the Public Assembly Facility Sub-Sector Council. What is key, he pointed out, is being able to profile a person or group who is incongruous to the environment and situation. For instance, a person wearing a heavy coat on a hot day, or perhaps glancing around nervously or not engaging in the activities but appearing to be sizing up the area instead.

The former policeman and Tactical Sergeant of a SWAT team (who admitted he’s been directly involved in hostile situations on several occasions), urged organizers and event planners to do a complete risk assessment study at least every three years. What are the measures taken for physical security of the attendees? Are there signs posted throughout the venue on what to do if orders are given for quick evacuation? Bold signs should lay out the rules and expectations.

According to research done between 2009 and 2016 by Everytown for Gun Safety and cited by Herrera, 54% of mass shootings have been related to domestic or family violence. The shooter exhibited warning signs in about 42% of those situations and in 34% of those, the shooter was actually in illegal possession of the firearms.

Herrera noted that typically homegrown violent extremists (HVE) with the ideology to commit violence live within a 30-mile radius, which allows them to make frequent visits to their prospective target in order to know and understand the venue’s security. These frequent visits are also known as pre-operational threat surveillance. of their target so they can learn, or already know, the environment. Think schools, churches, nightclubs, and office buildings; places where crowds gather.

He said to confirm access points been adequately manned and covered by monitored security cameras. Have structural designs been assessed, such as an underground parking garage? If a bomb goes off in the garage, does it implode the overhead building?

So, what does one do to be prepared?

First, force yourself to be aware of behavioral changes in people around you. Sudden poor hygiene, paranoia, dramatic mood swings or psychotic episodes. Have you noticed anyone in your school or workplace who seems to be obsessively thinking about weapons or who seems a sad lone or social misfit?  Have you heard of any plans that the person is fantasizing about, planning and rehearsing attacks? You may pass it off for sick humor when it’s gone on for weeks or months, but Herrera says rarely does someone just snap and start killing people. It’s been carefully plotted and planned.

During crisis individuals suffer certain physiological effects such as tunnel vision, cognitive impairment, motor skill degradation, and auditory exclusion.   These effects hinder once ability to immediately react to crisis and rather creates paralysis.  This condition is common when we hesitate to make a decision and become complacent in our daily lives, said Herrera, who, as an instructor for DHS, has trained 3,000 armed pilots to defend against acts of terrorism. He cited examples of mass shootings and what happened when the first gun shots rang out. “People either run without having an idea of where to run to, or they freeze from fright.” He said either scenario can get you killed. When people are scared, their heart rate increases exponentially while motor skills degrade. When highly stressed, he said people tend to hold their breath. He described that reaction as “immediately impacting cognitive thinking and creating tunnel vision.”

Automatic reaction to a condition because of mental or physical preparation through training is optimal during crisis. The answer, he said, is to train yourself to be aware of your surroundings and always position yourself in a position of tactical advantage in order to make behavior or situational observations.

Sit with your back to a wall at a restaurant, look around at the people around you even in a theme park or shopping mall to see if someone doesn’t fit. Going to a major event, such as an arena? Examine the layout ahead of time. Know where all the exits are and which is closest to your location. Imagine dangerous scenarios in those environments and mentally prepare a plan of evacuation.

The best time to fight back is if the perpetrator is directly in front of you. Think how you would react to surprise that person and give you a chance to escape or stop him. 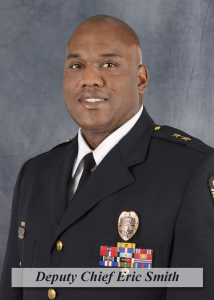 Following Herrera’s keynote was City of Orlando Deputy Chief of the Investigative Services Bureau, Eric D. Smith. In his 25 years with the Orlando Police Department, he has spent 10 years as a command-level officer and two decades in tactical and high-risk operations.

Smith echoed much of the same advice about being aware of your surroundings while also emphasizing that active shooter events can happen anywhere, anytime, so “always have a plan because your survival may depend on it.”

The veteran policeman has a three-point motto for surviving an active shooter scenario: Run, hide, fight.

Run: find an escape path and try to evacuate.

Hide: if evacuation is not possible, hide behind a barricade or a locked door. “Stay quiet,” he warned.

Fight: Take flight only as a last resort and only if your life is in immediate danger. In that case, “Commit to action and act with physical aggression. Use improvised weapons if available.”

Additionally, he said to practice escape routes. Above all, “Be realistic in your abilities to protect yourself. Only you can decide what action is best for you.”

Smith profiled most shooters as being males in the mid-30s. Yes, there have been many younger, but statistically, the average age is higher.

Safety and security at meetings, at private or public events and locations, has become an issue with which we all must recognize. There are active steps planners can take to protect their meetings and events attendees.

You may never be in a situation as you’ve read about or watched on the news, but now is the time to ponder, “What if?” and “What can I do to have the best chances to survive to another day”?

It may start with leadership committing to making security a part of the annual budget. “Organizations should not use lack of budget as an excuse for not implementing an Emergency Response Plan. Rather, fund all available resources to include training that involves the entire community, so costs for training can be offset,” explained Herrera. There are many helpful governmental resources available at no cost. “It’s not how much will it cost to secure your facility. It’s what’s the cost post-crisis if you don’t.”

He described situational awareness training as a key element to equip staff and volunteers to spot suspicious behavior and potentially thwart an incident. It’s about providing the tools to augment situational awareness and to take action to mitigate risk. “We must look beyond the traditional security measures and learn how to establish increased mental preparation, response, and mitigation to possible threats while understanding the current threat landscape and security initiatives that could be applicable to all organizations.”

Karen Kuzsel is a writer-editor based in the Orlando area who specializes in the hospitality, entertainment, meetings & events industries.  She is an active member of ILEA and MPI and is now serving on the 2019 – 2020 MPI Global Advisory Board for The Meeting Professional Magazine for the fourth consecutive year. She is a member of the Society of Professional Journalists. Karen writes about food & wine, spas, destinations, venues, meetings & events. A career journalist, she has owned magazines, written for newspapers, trade publications, radio and TV. As her alter-ego, Natasha, The Psychic Lady, she is a featured entertainer for corporate and social events. karenkuzsel@earthlink.net; www.KarenKuzsel.com; www.ThePsychicLady.com; @karenkuzsel; @thepsychiclady.