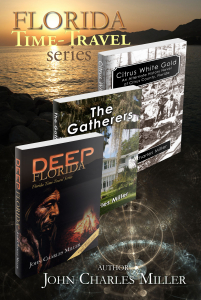 Citrus White Gold begins with the premise of “What if history had been different?” The action centers on the life of Jim Harkins, who crashed his bicycle along the Withlacoochee State Trail in Citrus County in 2001. When he awoke, he was in the 1890’s of Citrus County, Florida. He doesn’t know why or how he time travels, though in trying to return to his town of Homosassa Springs of 2001, Jim awakens to parallel universes of small West Coast Florida towns from the late 1800s to early 1900s. With each new adventure, from mining phosphate ore to working on a printing press, the descriptions play like a movie documenting the eras’ people and activities. Jim’s travels, his friendship with unexpected time traveler Morton McBride, and his nasty encounters with antagonist Lucas Owens, cement their places in history for future time travelers in the next two books.

The Gatherers leaps forward in time. Morton McBride’s suicide attempt ends in his being extracted to 2309, where avarice, technology, education and curiosity have created a loathsome ATTA dictator Chinsegut Island, a West Coast Florida island resulting when sea levels rose over 100 feet, permanently submerging many coastal cities. Technology created by Diamantis Huicz and funded by Dlan D’Aroomf is used to insert and extract people from their own timelines. Using knowledge of the past, many of the extracted people, thereafter called gatherers, are repeatedly re-inserted into the past to buy land, objects, or to change history for the sake of profit. The dynamic descriptions of how this is done, what is retrieved, and how it alters history are fascinating and fairly-simple to comprehend, even to someone not technology or science-oriented like me. The carefully-thought-out impacts of what science is needed to prepare and get the gatherers back and forth, as well as how it physically affects them, is food for thought. In this second book, Lucas Owens morphs into a key player who sets up book three’s actions.

Deep Florida begins with Lucas Owen’s son, Morty, becoming intent to find his purpose in life. That pursuit becomes an obsession to honor his mother’s Amerindian heritage by teaching ancient tribes about the tools and language that may eventually help prevent the invasion by Europeans in 1492, who are seeking the Indies. The chronology of his visits and how he determines what to teach them that will cause them to advance their new knowledge is both intriguing and pertinent.

The Florida Time Travel Series is available on www.Amazon.com.

Karen Kuzsel is a writer-editor based in the Orlando area who specializes in the hospitality, entertainment, meetings & events industries.  She is an active member of ILEA and MPI and is now serving on the 2019 – 2020 MPI Global Advisory Board for The Meeting Professional Magazine for the fourth consecutive year. She is a member of the Society of Professional Journalists. Karen writes about food & wine, spas, destinations, venues, meetings & events. A career journalist, she has owned magazines, written for newspapers, trade publications, radio and TV. As her alter-ego, Natasha, The Psychic Lady, she is a featured entertainer for corporate and social events. Karen@KarenKuzsel.com; www.KarenKuzsel.com; www.ThePsychicLady.com; @karenkuzsel; @thepsychiclady.