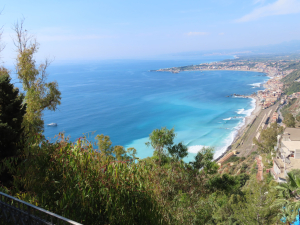 View of the coastline from Parco Florence Trevelyan, the public gardens that began as a private park.

In Part 1, we survived an arduous journey to Taormina for the first leg of our two-week Sicily-Southern Italy tour. We learned about the city’s discovery, its shames (eliminating Jews), and folklore stories woven into today’s culture, from pinecones to pottery heads of planted basil.

At the top of the pedestrian-only hill from our hotel, Eurostars Monte Tauro, is the serenely peaceful Parco Florence Trevelyan. The beautiful public gardens were originally created as a private park by Lady Florence Trevelyan Cacciola, a Scottish noblewoman married to the mayor. She styled her sanctuary as a typical English garden with an infusion of colorful varieties of flowers and plants from all over the world, but it was her passion for ornithology (bird watching) that inspired many of the park’s fanciful brick structures. The one most used as a backdrop for photos is called “The Beehives”. Taormina’s government now maintains the quiet manicured respite overlooking Mt. Etna and the coastline.