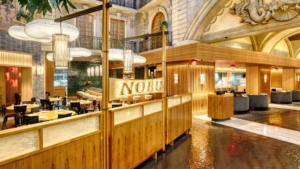 Nobu at Paris Las Vegas has opened. It’s the second Nobu restaurant on the Las Vegas Strip that Chef Nobu Matsuhisa has opened with partner Caesars Entertainment to showcase the Chef’s signature New Style Japanese cuisine. Natural wood elements add to the relaxing atmosphere of the 140-seat restaurant that features fresh fish and seafood in the form of nigiri and sashimi. This restaurant opening follows the recent redesign of 182 guest rooms and suites at Nobu Hotel Caesars Palace, the luxury boutique hotel within the larger destination resort. Caesars Entertainment continues to expand its partnership with Nobu Hospitality – the global lifestyle brand founded by Nobu Matsuhisa, Robert De Niro and Meir Teper. At Caesars Atlantic City, Nobu restaurant is scheduled to open in the late summer of 2022, followed by the anticipated debut of Nobu Hotel Atlantic City by the end of 2022. Additionally, Nobu Hotel and restaurant in New Orleans are planned as a part of the transformation of Harrah’s New Orleans into Caesars New Orleans.
www.caesars.com/paris-las-vegas/restaurants/nobu. 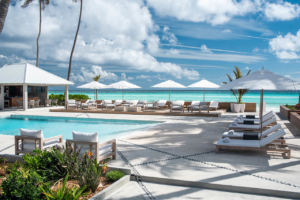 Pool area at Caerula Mar Resort in Andros, The Bahamas.

Homesick-branded candles and The Bahamas have teamed up with luxury resort, Caerula Mar Club in Andros, for a four-day, three-night escape package. Enter to win. One lucky winner (and guest) will be randomly drawn on February 28. The package is worth over $2,000.