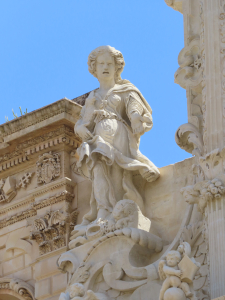 In Part 4, we discovered conical roofs of flat rocks not bound with mortar can be quite useful to thwart a King’s taxman and in today’s market, bring in the big bucks.

Barocco leccese is an ornate artistic style developed in Lecce and in Terra d’Otranto allegedly between the second half of the 16th century and the end of the 17th. It was developed as a thanks to God for protecting Christianity from the Ottomans. Lecce Baroque style leaves no empty spaces. The thinking was that empty space lets in the Devil. The 2,000-year-old city is considered the “Florence of the South” for the breadth of the fanciful designs of human figures, flowers, and animals carved in white limestone materials encouraged by Charles V, King of Spain, instead of the marble used in Naples. In Lecce, elaborate corbels appear under railings. Classical sculptures of women line the sides of doorways. The point of Baroque design is to wow!