FROM CONCENTRATION CAMPS TO TRENDY KRAKÓW
Part 1 was The Razing and Rebuilding of Warsaw
I grew up with the horror stories of the Holocaust, from family whispers to the stacks of books I devoured. (I can’t count how many versions of The Diary of Anne Frank I have read or seen acted.) Just knowing our Odysseys Unlimited tour included a visit to Auschwitz (known in German as Oswiecim) and its nearby sub-camp, Birkenau, made me edgy. We were travelling to Kraków, but the visit to the camps were scheduled for the earlier part of the day. Could I handle seeing the reality which has heretofore only been personal stories or movies? 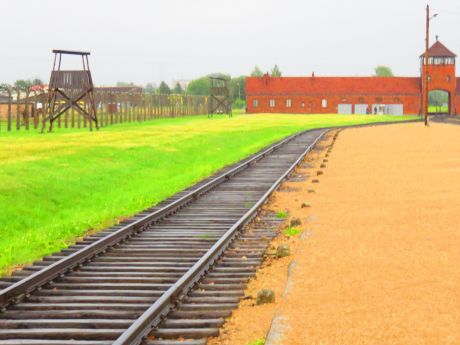 Trainloads of prisoners would arrive here at Birkenau

I propelled myself forward and listened attentively to the statistics of how many were killed, how many survived, and why it has been a Polish government project to preserve the camps and their wretched history. I shuddered when we passed by a gas chamber, held my breath when we entered barracks that still echoes the misery of their cramped, emaciated inhabitants, and END_OF_DOCUMENT_TOKEN_TO_BE_REPLACED
https://karenkuzsel.com/wp-content/uploads/2020/02/karen2.jpg 0 0 Karen Kuzsel https://karenkuzsel.com/wp-content/uploads/2020/02/karen2.jpg Karen Kuzsel2018-09-10 16:12:372019-12-16 20:54:45Part 2-EASTERN EUROPE: STRUDEL, SCHNITZEL AND STRAUSS, A FEW OF OUR FAVORITE THINGS