A short while back there was a viral-bound joke that if vaccination site managers wanted to have their operations, appointments and follow through go smoothly, they should turn to meeting and event planners. The joke continued that not only would the task be done skillfully and to everyone’s satisfaction, but all those seniors who had endured standing in long lines, (sometimes throughout the night), unsure if they’d even score a shot, would have been served snacks, a drink and maybe even a chair. I was likely among the meetings & event Insiders who didn’t see the surface humor in the proposition. I had discussed that same “duh moment” ad nauseum with industry friends and my husband and wondered why no one in charge hadn’t already figured that out. Who better to strategize all the minutia of appointments, parking, cue lines, qualified staff, and follow up visits to fulfillment, than a planner? 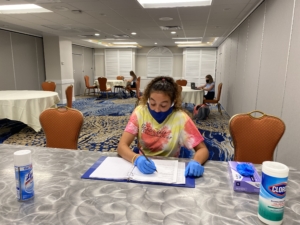 Fall has dropped in the United States. I heard that in Denver, CO the temperature on the weekend was 101 and by three days later was to plunge to the 30s and snow. Where I am based, we are still dealing with the sauna bath known as Florida summer that sometimes seems like that last 10 pounds on a diet—nothing you do can make it disappear! For some reason, my husband keeps saying “It’s Fall… things should be cooling down from the humidity-soaking 100+ degrees we still face daily.” I remind him that I have worked Halloween gigs (as my alter ego, Natasha, The Psychic Lady) wearing sleeveless blouses because temperatures have barely taken a dip into the low 90s.

The Met Hotel in Greece is both an art gallery and upscale hotel.

When I first began writing this column, I was working regularly for a high end travel magazine that catered to the hospitality, meetings & events industries. Over time I have realized that not all travellers visit destinations or plan events because they are part of a corporate or social group. This edition (and likely more in the future) will feature some personal travel options for adults and families.
HOT DEALS!
It’s an art gallery. No, it’s a hotel. No, actually The Met Hotel in the ancient coastal city of Thessaloniki, Greece is both. While END_OF_DOCUMENT_TOKEN_TO_BE_REPLACED
https://karenkuzsel.com/wp-content/uploads/2020/02/karen2.jpg 0 0 Karen Kuzsel https://karenkuzsel.com/wp-content/uploads/2020/02/karen2.jpg Karen Kuzsel2019-06-01 14:51:442019-12-14 21:10:11HOTEL HAPPENINGS & PROGRAM PROMOTIONS – JUNE 2019

Orlando, FL area restaurants and the Central Florida chapter of the Florida Restaurant and Lodging Association (FRLA) are partnering to make the Summer of Dreams come true for homeless Central Florida youths. The annual “Round Up For Kids” fundraiser for the Orlando After-School All-Stars initiative will provide meals, academic enrichment, tutoring, mentoring, and a backpack filled with school supplies for the upcoming school term. Last year, the Summer of Dreams program served 1,151 Central Florida homeless students. Diners can help just by letting participating restaurants know you want to support the cause by END_OF_DOCUMENT_TOKEN_TO_BE_REPLACED

How many of London’s spectacular palaces have you visited or hosted an event in? One of the most unexpectedly incredible venues I’ve ever been to is the Banqueting Hall. I kept imagining myself in a Renaissance dress and hair garland of flowers dining at the long table under massive wooden chandeliers and low-lit wall sconces while the musicians played lilting melodies. This place is truly fit for a luxurious dining event. The Banqueting Hall and other sites such as Kensington Palace and the Hillsborough Castles are all included in the special edition of Historic Royal Palaces, a guidebook of venues and special offers only available to Meeting Planners and Travel Specialists. The book is available in English, French, German, Italian and Spanish.

When I first learned about the 260-acre Safari Wilderness located halfway between Tampa and Orlando, my reaction was END_OF_DOCUMENT_TOKEN_TO_BE_REPLACED

WINTER’S COMING BUT THESE DEALS AREN’T COOLING OFF!
Save up to 20% when you book a holiday package at the Gaylord Palms (Kissimmee, FL), for stays between November 21 – January 7, 2018. Here are some of the perks included with this offer. ICE! featuring Christmas Around the World; breakfast with Charlie Brown™ & Friends; Build-A-Bear Workshop® Scavenger Hunt; snow END_OF_DOCUMENT_TOKEN_TO_BE_REPLACED
https://karenkuzsel.com/wp-content/uploads/2020/02/karen2.jpg 0 0 Karen Kuzsel https://karenkuzsel.com/wp-content/uploads/2020/02/karen2.jpg Karen Kuzsel2017-10-23 21:55:172019-12-16 21:16:07HOTEL HAPPENINGS & PROGRAM PROMOTIONS – LATE OCTOBER 2017

Hotel Unique in São Paulo, Brazil is offering a promotional rate for groups

There’s strong evidence that Hotel Unique in São Paulo, Brazil is appropriately named. Where else have you a hotel that resembles a half watermelon sitting on a food stand? The 94-room property has green-weathered copper stretching across the façade works to contain the unusual shape of the building. Curved walls and expansive spaces allow for internationally-amassed statement pieces and contemporary art. The rooftop terrace includes a crimson infinity pool and bar. The location is in the upscale residential area of Jardins. There are 10 meeting rooms, one extra room with a lobby view, and it can accommodate up to 1,000 people for reception. Book an event for up to 50 people and get a secial rate which includes room hire, in-room service, A/V equipment, lunch and two coffee breaks.

Last minute summer getaway plans for yourself or your group? Gaylord Hotels has an enticing offer, even if you can only book three to seven days in advance, as longs as the stays are by August 31. The deal varies by the hotel. Save up to 15% when you book Gaylord Opryland Resort in Nashville, TN at least a week in advance. Book either the Gaylord Palms Resort (Kissimmee, FL) or the Gaylord Texan Resort (Dallas/Ft Worth, TX) at least 14 days in advance and receive 15% off. You can earn 20% in savings by booking Gaylord National Resort in Washington DC just three days out. Make sure you provide the promotional code: ADP.

Book at least 15 rooms per night at Shula’s Hotel & Golf Club in Miami Lakes, FL by September 30 and receive a $109 room rate with a $60 per person complete meeting package including breakfast, lunch, AM & PM breaks. You’ll also receive a $100 Spa credit or Tee Times for four at Shula’s 18-hole END_OF_DOCUMENT_TOKEN_TO_BE_REPLACED

Journey Mexico is “dying” to take your group on a Day of the Dead cultural tour.

This is one incentive trip that your VIP clients may be dying to do! Journey Mexico offers a group tour for up to 14 guests to discover the Day of the Dead (Día de Muertos) in Oaxaca, Mexico, October 28 – November 4.  The tour combines education, historical knowledge, and an exploration of the UNESCP World Heritage city of Oaxaca as the community prepares to welcome their loved one’s spirits back to earth. Highlights include visits to exhibition, festivals and cemeteries to understand the significance of Day of the Dead elements, such as the cempasuchil flower and the objects that adorn the alter, or to visit the tombs populating the ceremonial sites. Guests will experience the art of Mezcal production and taste the “Pan de Muertos” a special bread only made during the season of Día de los Muertos.

Chopping cilantro and garlic with Chef Enrique Silva at Huerta Los Tamarindos. I was there with a press group.

Several years ago, I had the distinct pleasure of not just visiting Los Tamarindos, an Organic Farm & Restaurant located just one mile away from the Sea of Cortez and San Jose Del Cabos’ estuary, but I was one of the journalists cooking alongside the chef for an intimate cooking class. We toured the 17-acre farm with its organic fields and the recently renovated historic Farm House built originally in 1888 as part of our coverage of Los Cabos. The Farm, the first to grow and export organic produce, offers orchard tours, cooking classes and a vine-topped outdoor venue for events and meetings for up to 400 guests. An excellent teambuilding event, END_OF_DOCUMENT_TOKEN_TO_BE_REPLACED

The Whitby, a stylish new hotel in midtown Manhattan, NY

Time is running out to book a stay at Gran Meliá Nacional Rio de Janeiro and receive both a 20% discount with MeliáRewards, plus $200 in resort credit. Stay by August 31 at this beautiful São Conrado beach location.

Whimsically-colorful, cozy and being within walking distance to Central Park and Broadway, are just a few factors that make The Whitby, a new hotel and one of the latest additions to Design Hotels’ Collection, a charming treasure for small groups. It’s one of the few midtown Manhattan hotels with numerous balconies, several private event rooms, and its own and a 130-seat state-of-the-art cinema. The Whitby has 86 rooms and suites spanning 16 floors. The rooms range from 330 to 1,845-sf. Contemporary interior design is by Kit Kemp. The Whitby is the second New York property owned by Firmdale Hotels. Book now END_OF_DOCUMENT_TOKEN_TO_BE_REPLACED

The Basilica at Notre Dame, just one of six churches used for venue space in Montréal, Canada

For the several years that I worked on the radio for three different stations as Natasha, The Psychic Lady, I remember one of the co-hosts regularly signing off with “Remember that it’s nice to be important, but it’s more important to be nice.” That singular phrase sums up why I feel so concerned about what’s going on in the world, what’s happening in America with our election season mudslinging, and why I strive to provide the care and attention to how I treat others, even when stressed by circumstances beyond my control.

I’m an avid newspaper reader and watch a national evening news broadcast when possible. Lately I find myself shuddering with the same head-turning reaction I would give at watching a movie where murder and mayhem run rampant, wondering how can people abuse and misuse others so wilfully and destructively. I don’t understand politicians making a case for their presidency by how aggressively they slam and lie about one another instead of stating what they can (or would like to) accomplish (knowing full well that even the best of intentions cannot politically be achieved without the endorsement of people on both sides of the aisle.) I don’t understand the sheer stupidity of supporting candidates just because they spew vitriolic hate. As a newspaper/magazine writer raised on seeking the truth and not what I’d like the end result to be (a novel approach these days, isn’t it?), I find it appalling how many people accept blindly what they’re told and never bother to question or research (think of the plethora of hateful or deceptive emails you receive and wish you didn’t).

Thank goodness when I am working events as Natasha, I am lauded for my positive messages and the hope, comfort, laughter and friendliness I share. My measure of the event’s success isn’t just by the dollars I earned, but did I make an impactful connection with someone and what lingering peace do I feel from having made that connection.

My wish for you today, and tomorrow onward, is to take as your mantra that “it’s more important to be nice.”

It’s not too early to think about a relaxing Spring Vacation at Aulani, A Disney Resort & Spa in END_OF_DOCUMENT_TOKEN_TO_BE_REPLACED