PART 4: THE TROLL’S DAUGHTER DANCES, WATERFALLS PLUNGE, AND THERE’S SALMON… LOTS AND LOTS OF SALMON!
In PART 3: STEPPING INTO THE FAIRY TALE WORLD THAT IS NORWAY–GOAT FARMS, SKI RESORTS, FJORDS AND WHITE-KNUCKLE MOUNTAIN ROADS, we visited one of Norway’s most dramatic fjords, dined at a goat farm, and mellowed to the music of Composer Edvard Grieg.

The pastoral elegance of Lofthus

We leave Bergen, the second largest city in Norway, for the serene pastoral elegance of Lofthus, a city in Norway’s Fjord District. Small farms and villages tuck onto mountainsides. Slopes embrace sparkling fjords. Wild flowers grow haphazardly, creating a landscape of emotionally-charged blues, whites, greens, yellows and pinks. This is the Norway of picture postcards, of a place where time has paused to let one breathe crisp clean air and soak in the relentless natural beauty.
Lofthus
Where we stayed: 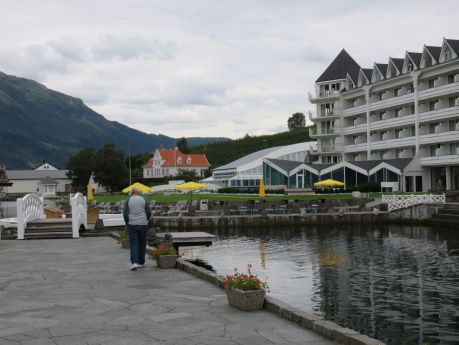 Hotel Ullensvang may be one of the most beautiful resorts at which my husband Russ and I have ever stayed. From the moment we enter the lobby and spot glass display cases of full-sized mannequins in regional costuming, I know this place will be singularly impressive. And that’s before I hone in on something that looks like a coat rack bearing large sculpted wooden apples. Each apple once held a telephone. We drop our belongings in our room and beeline to the hotel’s backyard that faces the Hardanger Fjord, which fronts steep rocky walls. A small white fenced bridge juts from near the shore to a walkway leading to a small deck bearing only a round cocktail table and four patio chairs. With friends and wine, we toast our incredible fortune to be sitting in this place of tranquil beauty. Between the shore and the hotel is a building no bigger than a toolshed that Edvard Grieg used for composing during his frequent stays. Hotel Ullensvang is frequented by Norway’s Queen Sonja, who has hiked the area so often that her path is now referred to as Queen Sonja’s Hiking Trail.

just one of the beautiful rooms at Hotel Ullensvang

Strolling through this 172-room 150-year-old hotel is like visiting an arts and history museum. One of my favorite rooms could only be admired from behind ironwork doors. The Monastery Wine Cellar, built in 1865, was part of the original hotel and is in use today for special events.

What we saw:
Enroute to Hotel Ullensvang, our Odysseys Unlimited Norwegian Splendor with Copenhagen tour group made two stops that each represent a facet of Norway’s claim to fame: salmon and orchards.

First stop was Hardanger Akvasenter, a floating salmon farm. Two enormous vats each contain about 50,000 fish that are caught in fresh water when they’re about one-and-a-half years old. They’re kept in the vats about another year-and-a-half, feeding on 70% plants and 30% remnants of fish parts the salmon farmers wouldn’t want, either bony or filet leftovers. The farm we’re visiting is considered small. Larger farms might have 100,000 fish per vat. Once the salmon are of age, they are slaughtered and within 12-24 hours, reach markets or restaurants. Eighty-percent of Norway’s farmed salmon are exported. 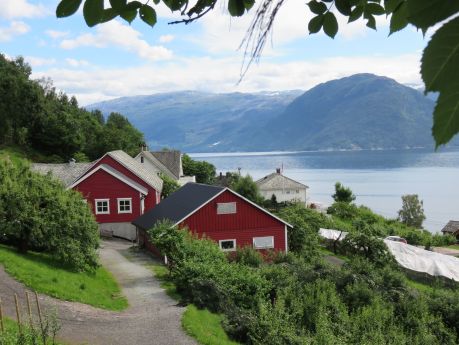 Looking over the Steinstø Fruit Farm

Ninety minutes from Bergen along the Hardanger Fjord sits the Steinstø Fruit Farm, owned by the same family since 1650. Now managed by the ninth generation’s brother and sister team of Ola and Heidi, the farm’s reputation doesn’t rest just on what it grows. It’s what is done with the 25 varieties of applies, 15 varieties of plum, and other fruits, including cherries, raspberries, and strawberries. Steinstø, which means Little House by the Stone, encompasses acres as far as the eye can see up the mountain on which the farmhouse and orchards reside, and down to the fjord, where they have a café and small grocery that sells their homemade jams, pastries and baskets of fruit. Before Tour Director Karin Hansen led us to the grocery, where I bought sweet black cherries and a jar of strawberry preserves, we were invited into the farmhouse’s 70-seat restaurant for a piece of Heidi’s famous apple cake and fresh apple juice.

When Heidi’s grandfather challenged her to find something useful to do to bring in money, she used her grandmother’s recipe to make the cake, hoping to sell enough to make the effort worthwhile. The first year, with a growing season for the apples she prefers (similar to Gravensteins) from April to October, she sold 1,000. Now she averages 7,000. The cake is a not-too-sweet dense apple-textured treat that she says begins with crushing the apples, cooking them with sugar and cinnamon as if making applesauce, and then freezing that mixture, which is later the foundation of the batter. Ola then guided us on a tour of the farm, something he is often hired to do for groups. Ola echoes a concern we’ve heard from other farmers. Who will take over the farm when he, Heidi and their spouses are unable. He said Norwegian teens are too lazy, so like other farmers, he brings in Eastern European “interns.”
The day following our salmon and fruit farm visits, we head off for what Odysseys and other Norwegian companies refer to as the “Norway in a nutshell” tour. Odysseys refers to it a day of “extreme beauty and diverse transportation.” It most definitely is.

a visit during the Norway in a Nutshell tour

Vidar, our calm and steady driver, guided us through the Hardanger five-mile tunnel, noted for roundabouts that are lit up by a circle of bright blue lights. From the tunnel over a suspension bridge, we took a two-hour ferry ride to Flåm. For Russ, the ferry ride was mesmerizing, capturing the essence of Norway’s fjords, villages and the dramatic scale of the jutting mountains and cascading waterfalls. The day was drizzly. Fog appeared like a surreal cloud, shrouding the landscape in a hazy mist.
At Flåm, we boarded a one-hour train ride up 2,900 feet and past dazzling waterfalls, such as Kjosfossen. A popular attraction unto itself, it drops 738 feet. Atop the waterfall is a small power station used to power the Flåm Railway. Cruise passengers often take the train for an excursion, receiving Norwegian cake and coffee afterwards. 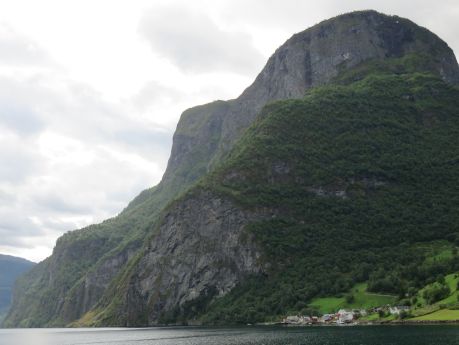 Village along the Hardanger Fjord

The train, built in 1893, passes through 20 tunnels and navigates 21 hairpin turns on its 20-kilometer (nearly 13 miles) track. We’re warned not to delay taking photos because there may be only a 20-second intervals before the next turn or tunnels, many of which were excavated manually. Suddenly, the train stops at a long platform. We hear ethereal music coming from the mountain as a platinum long–haired dancer in a flowing red dress glides, circles and spins across the rocks and onto the ruins of a long-ago fortress. The summer season actress and student of the local ballet school is portraying Huldra, the legendary daughter of the Troll King. Like the legend of The Little Mermaid, she has a tail and falls for a man. In this story though, if he fails to marry her within a limited time, she dies. He doesn’t. She does.

Huldra, the legendary daughter of the Troll King dances

Coming into a port

The Hardanger Nature Center Eidfjord is a three-story museum exhibiting the best of Norwegian nature. We walked through the exhibition and watched a 20-minute immersive 225-degree wide screen movie that took us on a tour of Norway through steep canyons, between mountains, and over waterfalls and glaciers. 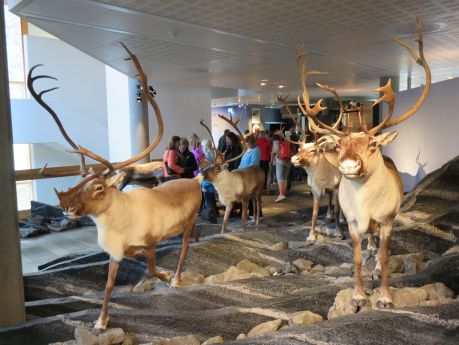 An exhibit at the Hardanger Nature Center Eidfjord

We’re on our way to the last city of our two-week tour, but before we reach Oslo, capital of Norway, there are more sights to see, including one of the highest waterfalls in Norway. Vøringfossen has a vertical drop of nearly 600 feet. It lies at the top of Måbødalen in the municipality of Eidfjord, which connects Oslo with Bergen.

Vøringfossen has a vertical drop of 600 feet

After the roaring beauty of Vøringfossen, we head next across Europe’s largest mountain plateau, Hardangervidda. We pass through the cross country and alpine ski resort town of Geilo, noting we see few power lines. Karin Hansen says Norway has extremely tight environmental protections. They bury the power lines so as not to impede scenic views, which is why tourism increases roughly six percent a year, according to Visit Norway.

www.hotel-ullensvang.no
www.akvasenter.no
www.steinsto.no;
www.norwaynutshell.com
www.hardangerviddanaturssenter.no
PART 5: OSLO, A CULTURAL METROPOLIS FOR MUSEUMS, ARTS, FABULOUS FOOD, THE NOBEL PEACE PRIZE, AND SO MUCH MORE!
Photos by Russ Wagner (except for any photos of us)
Karen Kuzsel is a writer-editor based in the Orlando area who specializes in the hospitality, entertainment, meetings & events industries. She is an active member of ILEA and MPI and is now serving on the 2016 – 2017 MPI Global Advisory Board for The Meeting Professional Magazine for the second consecutive year. She is a member of the Society of Professional Journalists. Karen writes about food & wine, spas, destinations, venues, meetings & events. A career journalist, she has owned magazines, written for newspapers, trade publications, radio and TV. As her alter-ego, Natasha, The Psychic Lady, she is a featured entertainer for corporate and social events. karenkuzsel@earthlink.net; www.ThePsychicLady.com; @karenkuzsel; @thepsychiclady.
https://karenkuzsel.com/wp-content/uploads/2020/02/karen2.jpg 0 0 Karen Kuzsel https://karenkuzsel.com/wp-content/uploads/2020/02/karen2.jpg Karen Kuzsel2017-09-15 19:06:492019-12-17 22:38:16DENMARK & NORWAY: ROYALLY RICH IN BREATHTAKING BEAUTY, FROM CASTLES TO FJORDS

HOLY C.O.W! (The Wines of California, Oregon and Washington)
Part 6: ALPINE ADVENTURES EXCEED EXPECTATIONS – MUNICH, GERMANY
Six Wines, Three Flatbreads and an Afternoon of Tasting
FUTURE OF CULINARY AND HOSPITALITY INDUSTRY BEGINS WITH FLORIDA HIGH SCHOOL COMPETITION
Booze, Golf and a Colonial Square: It’s not how your group meets and parties in North Florida…. It’s where you do it that counts
HOTEL HAPPENINGS & PROGRAM PROMOTIONS – OCTOBER 2021
HOTEL HAPPENINGS & PROGRAM PROMOTIONS – AUGUST 2015
PART 2: SPAIN AND PORTUGAL: HOW CENTURIES OF RELIGIOUS BATTLES LED TO ARCHITECTURAL WONDERS, SAVVY CUISINE, FRAGRANT WINES, AND THE HEROICS OF WHICH NOVELS ARE WRITTEN
0 replies