In Part 1, Architectural Icons Were Examined
Before I met my husband Russ, I would have looked at ornately-designed buildings or décor and thought, “How pretty” and likely that would have been the end of it. Married to someone who has taken me travelling internationally and domestically just to admire fine, sleek lines or fanciful carved motifs or intricately-patterned ceilings and has made a career from his knowledge and creative building skills, has turned my passing admiration into deeper appreciation for the art, skills and craftsmanship necessary to erect these structures. That so many cities have managed to preserve, restore and renovate buildings that could never again be (cost-effective) to be built in our lifetime is worthy of recognition. Buffalo is one such city.
Of course, having walked and gawked all day, one must eat to refuel energy. Just as architects and patrons of the arts have left their imprint on Buffalo, so have culinary artists who have created legendary dishes, such as Buffalo wings, that are (likely) known across the globe.
RESTAURANTS WE RECOMMEND
Panorama on Seven in the Buffalo Marriott Harborcenter was one of three places A Chamber of Commerce woman suggested we’d find the best Beef on Weck sandwiches in the area. What separates these three, including Schwabl’s and Bar-Bill Tavern, from others is that the seasoned meat is slow-cooked for hours, contrary to places that import frozen beef and then reheat at the last minute. For those of you not from Buffalo, Beef on Weck is a signature sandwich. Mounds of thin-sliced roast beef are piled onto a Kümmelweck bun, which is salted and caraway-seeded. The Panorama’s were served on sliders. Russ enjoyed the sliders and was eager to try the sandwich at Schwabl’s.
Schwabl’s began serving German-styled cuisine and Beef on Weck sandwiches 1837. Their current West Seneca restaurant is a step back in time. The waitresses might call you honey, the tables are close together, and you watch the chef slicing the meat on a counter, after END_OF_DOCUMENT_TOKEN_TO_BE_REPLACED
https://karenkuzsel.com/wp-content/uploads/2020/02/karen2.jpg 0 0 Karen Kuzsel https://karenkuzsel.com/wp-content/uploads/2020/02/karen2.jpg Karen Kuzsel2016-09-12 18:06:102019-12-17 22:20:17BEST OF BUFFALO – PART 2, EATERIES, ATTRACTIONS AND DAY TRIPS 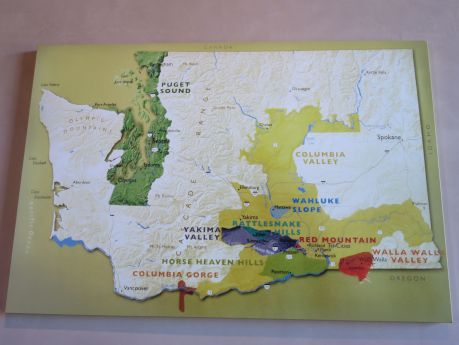 This latest visit to Washington wineries confirms what my husband Russ and I had already determined: we prefer bold and brash merlots, cabernet sauvignons, zinfandels, malbecs and syrahs.
Of course, there are other varietals and blends we are happy to wrap our tongues around (so to speak), which includes some crisp and clean whites and rosés, but give me a jammy red that fills my mouth with flavor and I am in my happy place. Which is why Yakima Valley and Walla Walla wineries jumped to the head of our “wine labels to explore” list.
Yakima Valley appellations – which include Yakima, Zillah, Prosser and the Red Mountain & Vicinity AVAs– is an 80-mile stretch of rural countryside. We focused our time in Red END_OF_DOCUMENT_TOKEN_TO_BE_REPLACED
https://karenkuzsel.com/wp-content/uploads/2020/02/karen2.jpg 0 0 Karen Kuzsel https://karenkuzsel.com/wp-content/uploads/2020/02/karen2.jpg Karen Kuzsel2016-08-06 22:44:322019-12-17 22:28:13WASHINGTON STATE WINE TASTING TRAVELS: YAKIMA VALLEY AND WALLA WALLA

We’re very fortunate living in the Orlando, FL area. While the rest of the country is still experiencing the bluster of March, we’re enjoying blue skies, low 80’s and gentle breezes. It was perfect weather for sitting on the back porch of Seasons 52 overlooking the lake, sipping on slights of wine and munching on flatbreads.
Seasons 52 is a Darden Restaurant original brand that specializes in fresh, locally sourced foods, with meals, appetizers and mini-desserts typically weighing in at no more than 500 calories, including the aforementioned flatbreads. The menu changes seasonally, and the wines offered on their stellar program called Flights & Flatbreads changes frequently. Each wine comes with tasting notes. The program is available daily up to 6 pm.
For $15, you can have a choice of whites or reds (roughly 3 ounces each) and one flatbread. For $20, their Acclaimed red wines are rated at 90+ points. According to Seasons 52, the Acclaimed wines are rated by Wine Spectator, The Wine Advocate, Wine Enthusiast END_OF_DOCUMENT_TOKEN_TO_BE_REPLACED

We doubled the pleasure at Wente Wineries in Livermore Valley. L to R: Karen and Gabrielle. photo by Russ Wagner

Before Napa Valley became the viticultural Eden that it is, there was Livermore Valley. What! You’ve never heard of Livermore?
Neither had we until our recent summer trek to California,  Oregon and Washington to see friends, family, and do a whole lot of wine tasting.
Livermore wasn’t our first stop, but it became an agenda on my planner husband’s activity list when he discovered that’s where Wente Winery is located. Though somewhat familiar with Wente wines, we knew that 80% of all wines produced in California never leave the state, so what higher-end gems were Wente keeping secreted away that only their club members or locals would know?
Livermore Valley, CA
Getting to Livermore was an easy 40-minute car trip from my daughter Gabrielle’s house END_OF_DOCUMENT_TOKEN_TO_BE_REPLACED
https://karenkuzsel.com/wp-content/uploads/2020/02/karen2.jpg 0 0 Karen Kuzsel https://karenkuzsel.com/wp-content/uploads/2020/02/karen2.jpg Karen Kuzsel2015-09-07 16:23:542019-12-17 23:04:58HOLY C.O.W! (The Wines of California, Oregon and Washington)

Spring is within striking distance, contrary to vicious storms still harassing the U.S and abroad. Here in Florida, where I am based, blue skies, light breezes and temperate weather in the 80s draw crowds to art shows, the beach, sports fields, and barbeques. Just like the colourful flowers and vegetables bursting from awakened shoots, people are eager to break from indoor venues and unwelcome routines to greet Spring with renewed vigor. Corporate clients and leisure travellers are ready to be enticed by exciting offers, and boy, are destinations, resorts and venues ready to deliver. Here’s just a sampling of what’s coming.
Omni Hotels Wine & Resorts Wine about their new partnership and property
Omni Hotels & Resorts just gave me another reason not to care if it’s 5 pm somewhere in the world as an excuse for imbibing in a hearty glass of fruit of the grapevine.
Their culinary series, “Flavors of the World” turns its Spring spotlight on the wines of Washington State, thanks to a new partnership with the Washington State Wine Commission. The promotion, running through May 31, pairs 10 Washington State wines (in 6 and 9-oz pours) with specialties of the state, such as artisan Washington Cheeses served with fig jam, honey and olives, Dungeness crab fritters, Dungeness crab and snap pea soup, apple and fennel salad, roasted salmon served with wild Mushrooms, and apple crisp with vanilla ice cream. Omni food and beverage professionals sacrificed their time and taste buds in February to crisscross END_OF_DOCUMENT_TOKEN_TO_BE_REPLACED