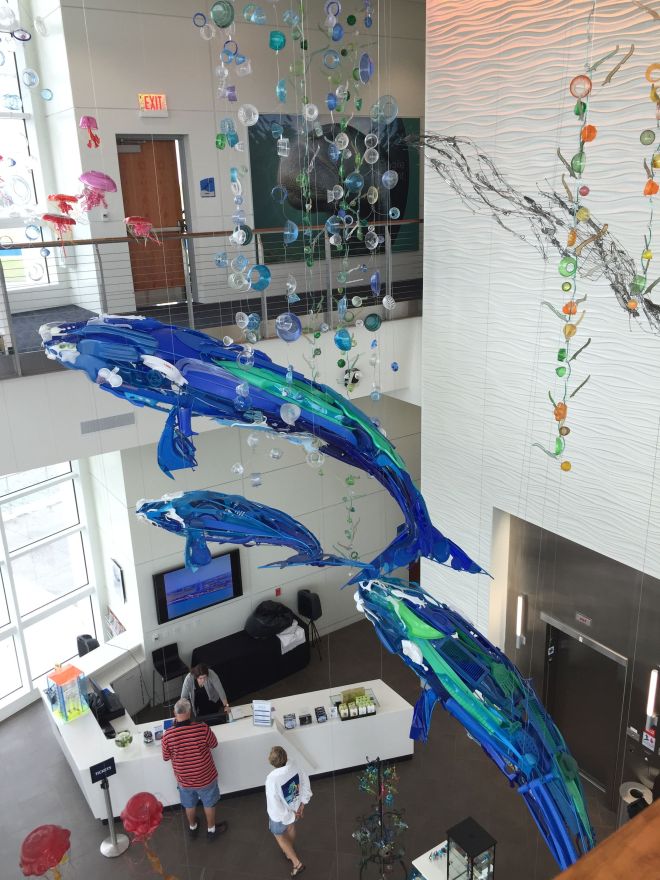 This begins my new “column” called Florida Fun. I realized when I was on this overnight getaway to Melbourne and Port Canaveral that I have written about many wonderful day trips, events, restaurants, adventures and venues, without drawing attention to them as tourist and group destinations within Florida and without including theme parks in the same breath.
Not that I don’t write about theme parks elsewhere in my blog or for magazines. I love theme parks. I consider myself a theme park-aholic without being obsessive, but I also realized how many Florida places I visit that perhaps others would enjoy knowing. So, here it is, the premiere of Florida Fun.
My husband and my recent 30-hour adventure began when he booked us into the Residence Inn Melbourne, located near the Melbourne International Airport and within a few minutes-drive to downtown Melbourne, where boutique shops and casual dining are aplenty. We chose that hotel because he’d earned a free stay from a Marriott promotion and honestly, we’d find any excuse to traipse down to a favorite restaurant, Pineda Crossings. His birthday and a free stay at a hotel not 20 minutes from Pineda Crossings and even less to all the fabulously funky boutiques framing the main downtown Melbourne area, seemed like finding out fudge brownie cake has no calories.
We’ve stayed at Residence Inns in other cities. They’re always clean, staff has always been amiable and helpful, and the complimentary breakfast has a variety of foods I’ll eat, like creamy grits that I can top with the minced green onions, cheddar cheese and occasional bits of bacon the hotel provides. This hotel had better coffee than is typical. We were thrilled that it tasted like real coffee and not warmed over dark tea. The exterior of the hotel could use some help. No curb appeal. Inside is nothing fancy, but the warm hues of deep burgundies contrasting with patterned walls of creams and browns lends a cozy ambiance. My husband loved that his back didn’t hurt the next morning from the bed and we both slept without being disturbed by street or hotel noises.
Pineda Crossings has been open about 18 years. Russ and I have eaten there (with and without family and friends) at least twice a year during most of that time. As it is well over an hour from our home, we tend to use other trips to Brevard County as our raison d’être to dine there. Never have we had anything less than a stellar meal. The portions are abundant. There are always several daily specials and even though locally sourced fish is the highlight, my husband swoons over their steak with Béarnaise sauce. We both think this is about the best Caesar salad dressing ever and have to pace ourselves getting through the generous salad before even thinking about our entrees.

Rusty’s Seafood and Oyster Bar: This 298-seat establishment emphasizes that it is family focused and it would be a shame to leave without trying their famous cornflake-crusted mahi Mahi. We didn’t get to taste that particular dish, but we did clean our plate of the signature key lime pie and slurped up a margarita that my finicky husband pronounced “smooth” in a pleased tone.
www.yummyflorida.com
www.millikensreef.com
www.wildoceanmarket.com
www.bajatavern.com
www.fishlipswaterfront.com
www.visitcocoabeach.com/Wyland-Galleries-of-Florida-10-4920.html
www.residenceinn.com/mlbap
www.rustysseafood.com
Karen Kuzsel is a writer-editor based in the Orlando area who specializes in the hospitality, entertainment, meetings & events industries.  She is a Contributing Editor-Writer for Prevue Magazine and is an active member of ISES and MPI. She writes about food & wine, spas, destinations, venues, meetings & events. A career journalist, Karen has owned magazines, written for newspapers, trade publications, radio and TV. As her alter-ego, Natasha, The Psychic Lady, she is a featured entertainer for corporate and social events. karenkuzsel@earthlink.net; www.ThePsychicLady.com; @karenkuzsel; @thepsychiclady.
https://karenkuzsel.com/wp-content/uploads/2020/02/karen2.jpg 0 0 Karen Kuzsel https://karenkuzsel.com/wp-content/uploads/2020/02/karen2.jpg Karen Kuzsel2015-01-28 22:20:542019-12-17 23:20:35FLORIDA FUN: AN OVERNIGHT ESCAPE TO MELBOURNE AND CAPE CANAVERAL (at the Port)