Part 1 – THE MAGNIFICANT SIGHTS AND SOUNDS OF AMALFI AND RAVELLO
Pizza, pasta and gelato. Wines that never reach America. Mythological gods and goddesses. Warring religious and political leaders. Artists, sculptors and architects whose works still breathe life into a people, country and tourism-driven economy.
Stunning landscapes of contrasting colors, from the foam-tipped whites of the sea crushing against jagged rocks of the Amalfi Coast to the neon yellow of the lemon tree-studded mountains of Ravello; from

the lush greens of rolling hillsides and sentry-stiff cypress trees defining Tuscany to the patchwork colors of stately buildings fronting Venice’s Grand Canal.
This is Italy, a country of jarring beauty, historical and artistic significance, cuisine now firmly rooted in many cultures, and wines that can turn the simplest of meals into a feast.
When I first told friends that my husband, Russ, and I were headed for our first foray to Italy, beginning in the South and taking a circuitous route to the north during a two-and-a-half-week tour, the first words they emitted were, “Wear elastic-waist pants. You’ll need them after the pizza, pasta and gelato.”
One could, indeed, eat one’s way through Italy, but with their predictions echoing loudly in my brain and involuntarily sucking in my stomach in anticipation, I chose instead to indulge moderately and walk more. And walk we did. Our Odysseys Unlimited Portrait of Italy informational packet cautioned that this would be a physically-challenging adventure. It was. Steep steps and hills, uneven surfaces, and long days of brushing against history while embracing Italy’s future.
We landed at Naples International Airport, but stayed just long enough to board a motor coach and head to Marmorata, just outside the town of Amalfi, for a much-needed nap.
AMALFI and RAVELLO
Where we stayed:
The 37-room Marmorata Hotel hangs on the edge of the Amalfi Coast, just a mile-and-a-half outside the town of Amalfi. True to the area’s reputation for ceramics, our wide-window sea-view room had tile floors of hand-painted blue tulips and gold leaves. As hungry as we were exhausted from more than 24 hours of travel, we sat in the former paper mill’s enclosed lounge area that overlooks the rocky cliffs and churning sea for a snack and our first taste of local Italian wine. As I quickly learned on this trip, my usual lack of enthusiasm for Italian wines was supplanted by rich and textured wines that have never reached an American table because so few are exported.

Marmorata Hotel hangs on the edge of the Amalfi Coast. Our room was just above the decking roof.

Bonus: discovering that this, and all other hotels on our tour, have working AC, something rarely found in European and South American properties at which we’ve stayed. Also, unlike our other international travel lodging, this was a full-sized and very comfy bed, not the twin beds pushed loosely together that we have found elsewhere. The buffet breakfast had the requisite slices of Italian meat and sausages along with fresh Buffalo mozzarella balls. 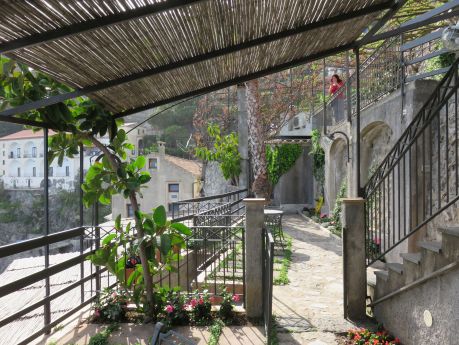 Looking out at the sea from the Marmorata Hotel

Where we dined and What we drank:
Our first dinner as a 24-member tour group, led by our vivacious Tour Director, Elizabeth Cirio (an Italian native who is also certified to lead tours in many countries) set the tone for the amazing culinary expectations we shared. Cheese cannelloni in marinara, sliced crisp potatoes, baked filet of bream, and two wine cork-shaped airy donuts steeped in amaretto and a dollop of fresh whip cream.
Bonus: coffee in every hotel and restaurant is as rich and dark as the coffee in most American hotels is more akin to warmed over tea. Over the next days we learned from Elizabeth many of the different names used for ordering coffee. Americano is espresso with more water; caffé lungo is a double espresso, and caffè macchiato has less milk than a latte. Caffè caldo is coffee with warm milk and caffè freddo is coffee with cold milk.
What we saw:
The entrance to Amalfi is heralded by Porta della Marina, a church dedicated to St Andrew. This gateway “door” to the harbor bears a huge ceramic panel created by Renato Rossi that honors the trade routes of the republic during the Middle Ages.

Eleven hundred feet above sea level, almost directly over the Marmarota Hotel, sits Ravello. Once a wealthy trading center all but destroyed by pirates and jealous neighboring states, Ravello reimagined itself into a tourist town in the mid-19th century. Terraced levels of plants, olives and lemon trees blanket the mountainsides. Two famous villas, Villa Cimbrone (now a hotel and known for its Terrace of the Infinity) and Villa Rufolo, can both be toured. The magnificent English gardens at Villa Rufolo, first planted by a pope who lived there, are considered the inspiration for Composer Richard Wagner’s Parsifal in the 1880s. His proclaimed admiration for Ravello was the catalyst for the now internationally famous Ravello Music Festival, also called the Wagner Festival. 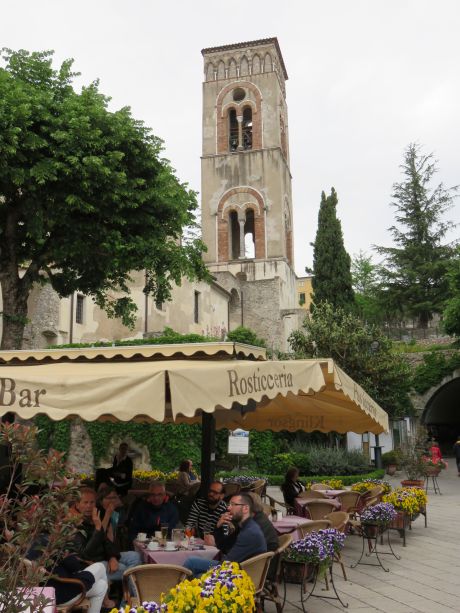 The town proudly markets the 1953 film, Beat The Devil, much of which was shot in front of the The Duomo di Ravello cathedral, created in 1272 by Nicolò di Bartolomeo, and at various cafes. Truman Capote and John Huston wrote the screenplay. John Huston directed. The film starred Humphrey Bogart, Jennifer Jones, and Gina Lollobrigida. In addition to its rich music and film history, Ravello is a quaint town of boutique shops selling fine ceramic works, limoncello, and creamy authentic gelato.
What we learned:
Each day’s outing began with Elizabeth teaching us Italian phrases and explaining customs, local superstitions and lore. Bene is good. Molto bene is very good. Bar is the word used to describe any establishment that serves drinks, whether it’s a coffee shop or a liquor lounge.
Amalfi is famous for sfusato amalfitano lemons, the basis for their renowned limoncello. The lemons are sweet with a thick peel. One of the first pieces of advice Elizabeth dispensed was to try any limoncello before buying. They vary a lot in tartness or sweetness.
Amalfi is also known for its unique paper, produced by textiles woven into a thick paper used for important documents. There is a paper museum, but Russ and I were too busy enjoying the colorful town and weather rather than spending our time indoors. 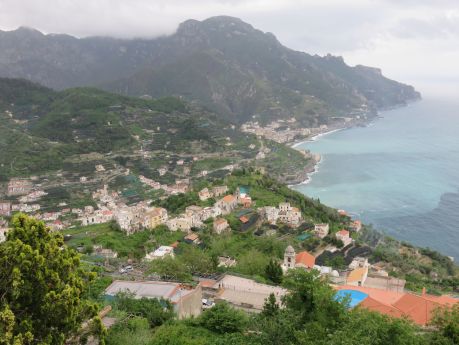 Good waiters leave you to relax and enjoy. They usually won’t bring the check until you ask. Coperto is a sitting charge. It can be per person or by the table. It can include whatever the restaurant decides, from unasked-for bread or even utensils. Coperto is not a tip. If you stand up at a café to drink coffee or have a snack, there should be no coperto. One to two Euros is typically good to leave in cash as a tip.  Of course, Americans tend to tip heavier. Tips cannot be left on credit cards. Servizio is a service charge.
Restaurants will not split bills. Doesn’t matter if you are asking the bill to be split evenly and each hand over a credit card. As we were bluntly admonished more than once (in different cities), “That is not the Italian way.” In other words, either indicate upfront who is paying for what and be billed accordingly, or carry lots of cash.
Taxis run on meters. Even if stuck in traffic, the fare continues. You cannot pay your fare with credit cards, only Euros. If you have your hotel request a taxi, you pay a surcharge. Typically, that can run three to four Euros. Do not whistle or flail your arms about to hail a taxi. It’s illegal. Need a taxi? Locate a taxi stand.
Churches and often cities are dedicated to saints whose body parts (even as little as a foot or hand) is sacredly retained. How each church or city obtains that body part/s is a mystery neither Elizabeth or local guides afterwards was able to fully answer (though you can be sure I asked!)
All gelato is not alike. Gelaterias sell homemade gelato. My husband Russ had a pistachio one each day. Pistachio gelato is latte brown and tastes like fresh ground pistachios. When gelato is sold in a shop selling sandwiches, pizza or other sundries, it likely is what you might buy prepackaged in a grocery store. The one time Russ bought some at a non-gelateria, it was green and tasted of mint.

Italians are superstitious and love Legendary lore: Hercules, that hunk of godlike muscle, fell in love and wanted to marry Melphe, a nymph. She died. He thought this area where the sea meets the coast the most beautiful spot on Earth and named it for her; hence, Amalfi.
Then there is Flavio Gioia, considered the inventor of the compass, despite there being no proof the ancient mariner actually existed. Nonetheless, you can view his 1889-created statue in an Amalfi roundabout.

The University of Texas at Austin’s football team, the Longhorns, share a hand signal with Amalfi’s populace, but with a very different meaning. Instead pf a “go team” type of Rah, in Amalfi, when the hand is bent and both the forefinger and little finger are raised, it signifies the horns of the devil. It’s used to indicate to a spouse that the husband/wife is being unfaithful. There’s also a popular pendant that looks like a red chili pepper and is often hung from a keychain, car mirror or in the house. The talisman indicates you defeated the devil.
Next in Part 2 – SEX, LIVES AND JEWELRY OF POMPEII, SORRENTO AND MONTECASSINO
www.marmorata.it/en/home-page.aspx
www.hotelvillacimbrone.com
www.villarufolo.it/home.html
Karen Kuzsel is a writer-editor based in the Orlando area who specializes in the hospitality, entertainment, meetings & events industries.  She is an active member of ILEA and MPI and is now serving on the 2017 – 2018 MPI Global Advisory Board for The Meeting Professional Magazine for the third consecutive year. She is a member of the Society of Professional Journalists. Karen writes about food & wine, spas, destinations, venues, meetings & events. A career journalist, she has owned magazines, written for newspapers, trade publications, radio and TV. As her alter-ego, Natasha, The Psychic Lady, she is a featured entertainer for corporate and social events. karenkuzsel@earthlink.net; www.ThePsychicLady.com; @karenkuzsel; @thepsychiclady.
Photos by Russ Wagner, a retired government planner/builder who has a passion for trains, travel and taking photographs.