In Part 1, our journey began in Albi before exploring the medieval city of Carcassonne and then the Abbaye Fontroide in Narbonne.

La Villa Duflot sits in a three-acre park with olive and palm trees. The hotel’s site says it has just 24-rooms, but it is apparent they have added many more than that. We had to walk outside the hotel’s lobby to reach our room in a first-floor wing. The hotel is styled after an Italian villa, although the décor was more Art Deco. The dining room in the evening is

Rain washes the inside of this cadillac taxi.

packed with locals as it’s considered one of the area’s leading fine dining restaurants.

Our day excursion to Figueres, Spain was predicated on seeing the Dali Theatre-Museum. My husband Russ and I visited the Dali Museum in St. Petersburg, FL when it first opened in 2011.The St. Petersburg museum dazzled architects world-wide with its simple rectangle shape, 18-inch thick hurricane-proof walls, and the enormous free-form geodesic glass bubble referred to as the Enigma. Composed of 1,062 triangular pieces of glass, the Enigma is 75 feet tall. One of the most significant design details is the helical staircase leading to the second floor. The first time I visited, I confess to being somewhat creeped out by the paintings depicting cadaverous animals, insects, and pictures I was positive were painted while under the influence of mind-altering drugs.

After this Southern France tour with Odysseys Unlimited, and the excellent guided theater-museum tour with explanations of the symbolism of his work, Russ and I were eager to revisit the St. Petersburg museum to see if our perspectives on his art has changed. It had. Though the art had rotated with others in the collection, with my newfound knowledge of Dali’s symbolism and clarity of his influence as a leading surrealist, I had new appreciation. The strongest comparison I can make of the museums is that they both house extensive Dali works, from paintings to sculptures. The Florida museum has a much larger and diversified shop, a small café of Spanish tapas, and a new virtual reality station that immerses you directly into a Dali painting. It was both startling and amazing.

Our initial museum visit in St. Petersburg did not prepare us for the reconstructed theater in Spain. Even a block away, it was obvious The Dali Theatre-Museum is “a horse of another color” (if you don’t mind me alluding to “The Wizard of Oz”). Large sculptured eggs (birth, fertilization of ideas?) and sculptures ranging from Hollywood Oscars figurines to a deep-sea diver compete with religious symbols for attention in the courtyard and on the roof. As soon as you step in you are confronted with a magical, surrealistic, emotionally dynamic display of an oversized painting honoring the love of his life, Gala. To the immediate left, Lincoln in Dalivision is a mesmerizing portrait of Gala that morphs into Abraham Lincoln when you stand back far enough to let your eyes relax. He painted two similar versions of this painting, with the other residing in St. Petersburg. What was originally the theater stage is now surrounded by a u-shaped wall of niches filled with statues resembling Oscar figures, an honor paid to the movies and theater of which he was so passionate.

Dali described the former Municipal Theatre as “in front of the church where I was baptized and because it was precisely in the lobby of the Theatre that I had my first exhibition of paintings.” Inaugurated in 1974, it now holds 1,500 works of art and his crypt. Like the Enigma in St. Petersburg, this theatre-museum also bears a surprising structure of significance. A geodesic dome said to have been entrusted by Dali to the Murcian architect Emilio Pérez Piñero, tops the building.

The local guide explained the symbolism in Dali works, such as ants and insects representing the decay and death of life. She noted that Gala figures prominently in many paintings, usually representing women who are saintly and angelic. Melting clocks represent time being flexible. 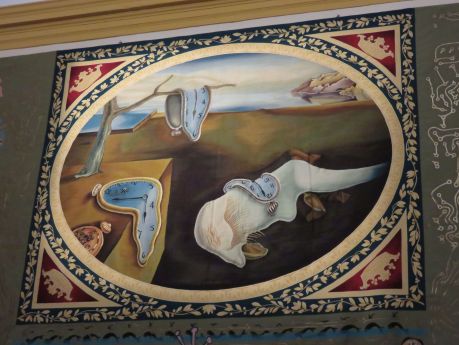 One entire room on the 2nd floor is dedicated to the sassy American actress, Mae West. Large scale soft-sculptured lips (often reproduced in his jewelry and clothing pieces) and eyebrows are arranged to be admired from standing back behind an archway of Mae West’s blonde locks. In the theatre’s intermission room, intricate ceiling murals were influenced by the Sistine Chapel. Recently acquired are photos of Dali in multiple poses, photographed by Robert Whitaker, who became famous for his many candid shots of The Beatles.

One particularly fun element is a full-length Cadillac taxi with a broken window that’s raised above the ground. Mannequins of Dali and Gala sit inside, commemorating the couple’s road trips across the United States. Our Tour Director, Fanny Poirier, inserted a Euro and rain suddenly coated the inside of the taxi. Perched above the car on a platform, an umbrella opened and shut.

We also explored the Jewel Box Room, so-called because the walls are red velvet-lined and he proclaimed every painting in there is a jewel.

Salvadore Dali was a complicated human. Both his father and his older brother (who died nine months and 10 days before he was born) were named Salvadore, a factor that compelled the artist to be obsessed with spirituality, life and death… forever trying to prove he was the “real Salvadore.” The museum also became Dali’s last home. After Gala’s death, he said he had nothing to live for and isolated himself in the theater’s tower, where he died five years later. Gala is buried in a nearby castle he bought for her. 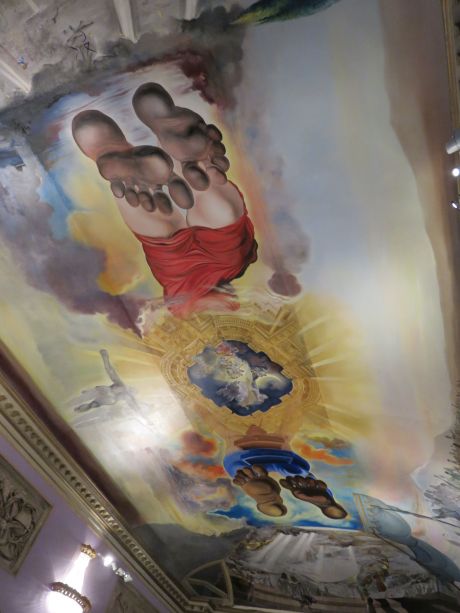 Annexed to the Theatre-Museum, but for a separate ticket, is the Dali Jewels. The permanent exhibit, created between 1941 and 1970, includes 39 jewels in gold and precious stones, 27 drawings and paintings on paper that he used to draft the designs. The collection contains jewelry with moving pieces, such as a ruby-studded heart that pulsates within a gold heart-shaped pendant.

With little time to eat, we did a quick lunch at Zeppelin on the corner by the Dali Theatre-Museum. Food was inexpensive, tasty, and offered many selections of tapas, salads (try the cheese salad), Spanish omelets, and fruit smoothies.

View of Collioure from the ramparts of Chateau Royal de Collioure

There’s a reason Collioure is called the “City of Painters.” Among the legendary painters who captured the area on canvas were André Derain, Henri Matisse and Pablo Picasso. Collioure is also famous for fresh anchovies. Pretty much every restaurant we passed advertised them served in an assortment of ways. This picturesque stop was one of Russ’ favorites, one he wishes to revisit one day.

We explored the hilly seaside city, founded in 673 as a Visigoth port, by climbing steep narrow roads hemmed in by colorfully-painted houses and window sill flower pots. Boutique shops crowded against sidewalks. Replicas of paintings by Derain and Matisse hang on the rock wall facing the Mediterranean beach front, many near to the spot where originally painted after the artists’ 1905 arrival. Cafes under large sun umbrellas or bright awnings dot the waterfront.

Russ and I scaled the steps of Château Royal de Collioure, a 13th-century Knights Templar former military fortress near the Spanish border. From the ramparts we saw the soft pastel-colored houses with terra cotta roofs tiered on the city’s surrounding hilly terrain. On another jut of land along the waterfront, we saw Our Lady of the Angels parish church. Outside the church is plain, but inside the ornate Baroque architecture, gilded statues and paintings offer a contrasting appearance.

Cafes and shops line the streets

Collioure (also the name of an Appellation d’Origine Controlee) is known for red, rose and a few white wines. Fanny had mentioned the Banyuls dessert wines are popular, but we were unable to taste those.

We did, however, drink a crisp, delicate local white wine with our lunch at La Boqueria. Russ had fried eggs with ham, French fries, and baguette. He said the eggs tasted as if they’d just been laid minutes before and enjoyed that the ham was not salty, but was thin-sliced liked prosciutto. I ate ham croquettes: a hot puree of ham and cheese that simply melted in my mouth, along with a small side salad with fresh balsamic dressing. Even with two glasses of wine, the bill was under 20E.

Even the storm drains have character in Collioure.

I don’t typically write about rude merchants, but our experience at Les Comptoirs de Lou, located on Argeles sur Mer, warrants issuing a note of caution. We aren’t positive the owner? clerk? tipped the scales more in her favor than merited, but our two small bags of dried fruits and nuts ended up costing us 47 Euros. We voiced our concern, but as our time was short and other customers were in the shop, we opted to eat the cost and move on.

Perpignan Cathedral of Saint John the Baptist is a Roman Catholic church near the Spanish border and whose exterior is composed of pebbles. Although initially constructed in the 13th century, renovations in the 1500s through the 1600s were completed in a Burgundy design. The focus of a 15th century chapel is a 13th century statue of a suffering Christ. This was highly unusual to produce a statue of him suffering. On-site, Campo Santo Funeraria is the only cloister-cemetery classified as a historical monument since 1910. Today the cloister looks like a square plaza with arched niches forming the side, but these niches once held the coffins of rich people. 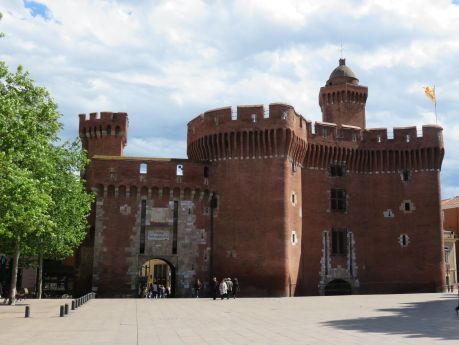 A castle in Perpignan.

The City Hall is decorated in pebbles, a popular late 14th century design.

Today in France, couples must have an official wedding ceremony in the Town Hall, followed by a religious service if desired. Banns (notification of their intent to marry) must be published months ahead in case anyone objects. The “wedding” room in Perpignan has beautiful Italian decorative inserts in the coffered ceiling.

Tile inserts line the ceiling in the Town Hall room where weddings occur.

Our group dined at the Villa Duflot’s restaurant three nights in a row following our day excursions. With each meal there was local wine (red, white or rose). One evening I had fillet of bream, my first time having this light, white fish. It was served with a creamy saffron risotto. Russ enjoyed his selection of Iberian pork with mashed potatoes. Unlike the Iberian ham we’ve had in Spain, this was not heavily salted. That evening, both desserts were winners. I enjoyed the Baba au Rhum and Russ happily wiped out his Crème Catalane, which was Crème Brulee with a fancier name.

A fish appetizer at Villa Duflot.

In Part 3, we ride a barge on the Canal du Midi, take a cooking class and do a wine tasting in Avignon before checking out the Pope’s Palace. Then it’s on to the ancient Roman aqueduct Pont du Gard before discovering just what exactly is up with the light that drew Vincent Van Gogh to Arles.

Karen Kuzsel is a writer-editor based in the Orlando area who specializes in the hospitality, entertainment, meetings & events industries. She is an active member of ILEA and MPI and is now serving on the 2019 – 2020 MPI Global Advisory Board for The Meeting Professional Magazine for the fourth consecutive year. She is a member of the Society of Professional Journalists. Karen writes about food & wine, spas, destinations, venues, meetings & events. A career journalist, she has owned magazines, written for newspapers, trade publications, radio and TV. As her alter-ego, Natasha, The Psychic Lady, she is a featured entertainer for corporate and social events. karenkuzsel@earthlink.net; www.ThePsychicLady.com; @karenkuzsel; @thepsychiclady. Food photos for this series by Karen Kuzsel.

All other Photos by Russ Wagner, a retired government planner/builder who has a passion for trains, travel and taking photographs.