Our lake thinks it’s an ocean with a tropical storm pushing its waves into foamy peaks before it slams onto the shore. The lake is just across the street from the picture window of our room in the Gran Hotel Colonos del Sur in Puerto Varas, Chile.
It’s day 12 of our 18-day expedition to Patagonia with Smithsonian Journeys. Getting to Puerto Varas was tedious. Our group of 20 travelers from across the United States and Switzerland, as well as our illustrious Tour Director, Nick Tozer, left the iconic mountains of Torres del Paine National Park, drove three hours by coach to the Puerto Arenas Airport, flew two hours and then drove another half hour by comfy coach to our fifth hotel. Each hotel becomes progressively more modern, more beautiful.

Our travel was delayed yet again by a late LAN flight. So far they’re batting 100%. No flight has left on time.
We don’t arrive until 11 pm, still the dinner hour for many Latin Americans. Though we are a tired party, none of us turn down welcoming gestures of the bartender’s freshly made pisco sours and the chef’s homemade miniature empanadas. As if the delectable bites weren’t a treat, our room bears another plate of tasty bites: cheeses, nuts and slices of lunch meats. We nibbled, put the rest in the fridge, and decide this room, rich in creams and brown tones, was comfortably cozy. Maybe because the 98-room contemporary hotel is now a part of the Radisson Hotel family, we can flush toilet paper in the toilet! (If you don’t get my exhalation of joy, read

The long trek up Volcano Osorno. photo by Russ Wagner

Part One of our Patagonia journey.)
As ever, Odyssey Tours (the travel arm for Smithsonian Journeys) has arranged for our rooms to face the scenic views. Lake Llanique-that-thinks-its-an-ocean purrs like a young lion, a sound so soothing we opened our windows thinking we’d sleep soundly. We would have but for the endless blaring of street traffic horns. OK, window closed. Curtains pulled. Exhausted sleep follows.
Morning light glazes the water in silvery sparkle. Surrounding the now calm lake, the Andes mountains stand like sentries. Across from the lake, the conical Osorno Volcano (which we would hike on) and the snowcapped peaks of Mt. Calbuco and Mt. Tronador are clearly visible from the lakefront. Once again, the breakfast buffet offers generic cheeses, ham slices, delicious fresh made breads, not-quite cooked bacon, runny scrambled eggs and a variety of drinkable yogurt. There are many bowls of fresh fruits, nuts and cheeses we’ve not had elsewhere.

View from a mesa on Volcano Osorno. photo by Russ Wagner

The day began with a visit to a local handicraft-farmer’s market in the fishing port of Angelmo. The array of fish, sausages and vegetables is colorfully invigorating. The locally-produced artisan crafts? Not so much, especially when we’ve seen so many of the exact items elsewhere. Nonetheless, it does seem to be a popular venue for buying souvenirs. Shopping time has been scarce, but then, why would one spend many thousands of dollars to fly across the world to see some of the most iconic scenery on this great Earth, and then spend too much time shopping?
Russ and I had exchanged very little money for local pesos, banking on the fact that we almost always could use credit cards in restaurants or for any large purchases (if we ever got to shop!) When

Volcano Osorno looks like the surface of the moon. photo by Russ Wagner

I was desperately seeking a restroom, it came as a shock that it would cost 300 pesos to walk in. Nick to the rescue with coins and walking me safely to a restroom across from the market. Here’s a gentle reminder (if you’ve forgotten details from Part One): always have toilet paper/tissues and some form of hand sanitizer. The restroom had neither.
This was the first, and only, day of the rainy weather that had been predicted for our entire trip.
Weather notwithstanding, the day took a decided upbeat turn when our local guide, Charlie (an affable Brit who’d been living in the area for 14 years with his family), escorted us to Museo Antonio Felmer. Puerto Varas was settled by German immigrants. In the mid-1850s, Chileans were afraid to bring in laborers from countries who might try to build an army and overtake the country. Germany was a small and less-than-powerful country back then, so German immigrants were brought in and were given land to cultivate.
Felmer was one of those immigrants. His desire to respect and maintain his German heritage for his family and the community of Germans became an obsession. He collected every bit of minutia he could that reflected the German’s everyday existence, from cooking tools to sewing machines, land clearing equipment, household furniture and décor, clothing, books and equipment for making apple cider and butter. When the collection outgrew his house, his wife moved it all to their three-story barn. This museum is exactingly organized. What topped off this incredible family-owned and still maintained museum is that family members installed a café on the second floor. We had some of the best apple and sour cherry kuchen I have ever had.
For lunch we just wanted a nosh. Café Danes, a short walk from our hotel, had been recommended for having the best empanadas. They were also the largest ones I’ve ever seen, let alone attempted to eat. We sipped on a lovely Carmenere wine and forked into empanadas that were each nearly the size of the dinner plate.
Puerto Varas is the largest city in Southern Chile. It rains about 300 days a year, but its unemployment rate of just 3% is one of which any city could be envious. Salmon is one of the main industries. In fact, we were told Southern Chile harvests more salmon than Alaska. Another interesting tidbit is that Chile has 2000 volcanos. The only country with more is Indonesia. Eagerly awaiting tomorrow when we head to Volcano Osorno. 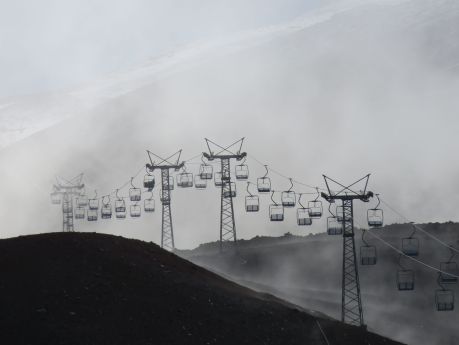 Gondolas take skiers to the top. photo by Russ Wagner

Dinner that night was on our own. Many of us ended up at Las Buenas Brasas, which Nick and Charlie proclaimed the best in the city. The food (and wine) were outstanding. Russ and I walked the few blocks, past the line of peaceful sleeping dogs that seem to be ever-present on the sidewalks, through the lush greenery and into one of the café’s small dining rooms. Russ had the best steak he’d had yet on the trip and a large mound of freshly-pared and cut fried potatoes. I devoured a bowl of pureed vegetable soup and did the best I could on an enormous crepe filled with poached chicken and blanketed by a spinach and almond sauce. All our fellow travelers who ate there that evening were just as jubilant about their meals. If you visit the city, do not miss out on this dining experience!
Our one day of rain vanished with the morning. Ahead of us was a hike to the Vicente Rosales National Park and a trek up to Volcano Orsorno. David Scott Palmer, the Smithsonian Expedition Speaker on Latin American politics, history and culture who had presented a number of lectures to us throughout the trip, had been to this site many times since 1960. This was the first time, he said in amazement, that he had ever seen the top of Osorno clearly. (And yet again, it’s proof of the magic our collective group seemed to emanate for enjoying extraordinary experiences.)

Volcano Osorno basks in the sun. photo by Russ Wagner

Our bus driver crept up the winding road. At 4,000 feet, he left us off. Frankly, after the maneuvers our driver had to make to get our bus safely through the narrow switchbacks, I was more than happy to leap off the bus. The hike up a planned path wasn’t difficult. Just steep. Russ became too winded from the altitude and didn’t scale the last portion, but he was just as happy to be taking pictures of the serene surroundings. Ororno is a ski and hiking resort, with a gondola ride that can take skiers up much higher than the mesa on which we stopped. The low-hanging clouds were a smoky haze that would cleared long enough for the sun to belt out a radiance of green, golds and rusts against the surrounding mountainsides, though the volcano itself is still layered in a dark ash that makes it looks like a barren lunar landscape.
For lunch we dined at BomBon Oriental, just outside the park. The owner has another successful pastry shop and restaurant elsewhere that specializes in Middle Eastern pastries. He’d been persuaded to open this restaurant, a favorite of locals and tourists. The restaurant reminded me of California-casual, with wood beams, lots of open space, lots of greenery and art lining the walls. We began with 4” squares of a crisp pita-like fried dough and a spicy tomato bruchetta. This was one of our pre-set meals. I chose salmon and Russ, the steak. Both came with sautéed vegetables and a section of potato. Dessert was a kuchen topped with berries grown on the property. I bought a jar of homemade jam from the berries, which I sparinglyuse because I know there isn’t a way of getting any more.

We walk off lunch in another part of the national forest. In both locations we walk on thick ash from the most recent earthquakes. Charlie, Nick and Scott regaled us with stories of the destruction and the amazing quick pace of recovery, thanks to the efforts of the community and surrounding area. The airport had closed for days and the Balmaceda Airport closed for a year. We could still see evidence on the Pan American highway where huge sections of the newly-completed roadway had been uprooted and pushed vertical.
The next morning was another early day. Bags outside our door by 6:30 am. Off once again to an airport. This time to Puerto Montt Airport for a flight to Santiago, our final stay on this journey.
Part One: Buenos Aires
Part Two: Ushuaia and Cruising on the Stella Australis
Part Three: Torres Del Paine, One Of The World’s Most Beautiful Natural Wonders
Part Four: Puerto Montt and Puerto Varas, Chile
Next: Santiago, An Urban Awakening After Patagonia
Karen Kuzsel is a writer-editor based in the Orlando area who specializes in the hospitality, entertainment, meetings & events industries. She is a Contributing Editor-Writer for Prevue Magazine and is an active member of ISES and MPI and is now serving on the 2015 – 2016 MPI Global advisory Board for The Meeting Professional Magazine. Karen writes about food & wine, spas, destinations, venues, meetings & events. A career journalist, she has owned magazines, written for newspapers, trade publications, radio and TV. As her alter-ego, Natasha, The Psychic Lady, she is a featured entertainer for corporate and social events. karenkuzsel@earthlink.net; www.ThePsychicLady.com; @karenkuzsel; @thepsychiclady.