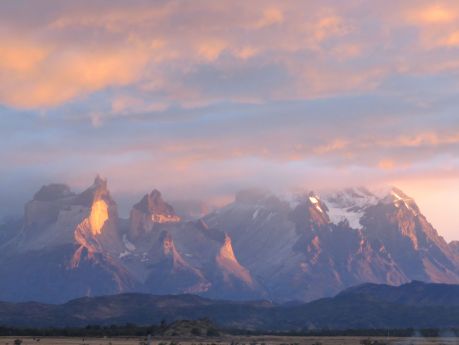 April 1. April Fool’s Day and the biggest joke of the day was our group thinking our early morning LAN flight to Santiago, Chile would leave on time. We were at the Puerto Montt Airport by 8 am for a 10:15 flight. Technically, our airplane was there but it was somewhere above us circling above the dense fog that rendered anything beyond the glass windows just an opaque smoky haze.
The arduous pace our group has kept has taken its toll. Some are sick. Most of us are exhausted. The hours of fog-induced delay have pushed our schedule back. The plan to tour Santiago before our night’s activity became an hour stroll among crowded streets and an even more crowded plaza (watch out for the pickpockets!!). We spent little time in Santiago but my initial impressions are of a tattered-appearing city, overcrowded and ill-adept or disinclined to preserve their historical architecture. After a quick shower and change of clothes, we met inside the lobby of Hotel Atton Vitacura to find out which home we’d each be visiting for dinner with a local host. 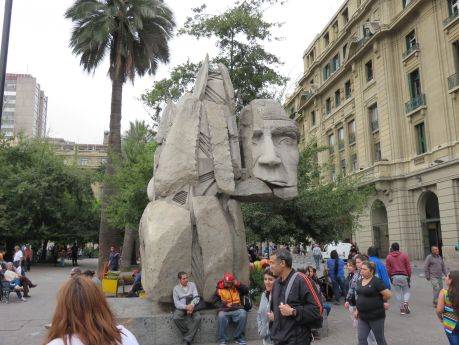 Statue in plaza in Santiago, Chile. photo by Russ Wagner

As this was Russ and my first group tour, we didn’t quite understand what dinner with a local host meant. In this case, volunteers who are part of the Smithsonian community agree to host a home cooked meal for a designated number of people. As we came to understand, the host is provided requested provisions. Our group of four couples was assigned to Andrea, a well-travelled woman in her 30s who spoke fluent English. A driver picked each group up and delivered us to the respective front door. In our case, Andrea and her five-year-old (total cutie) son live in a fashionable high rise in a newer section of Santiago. 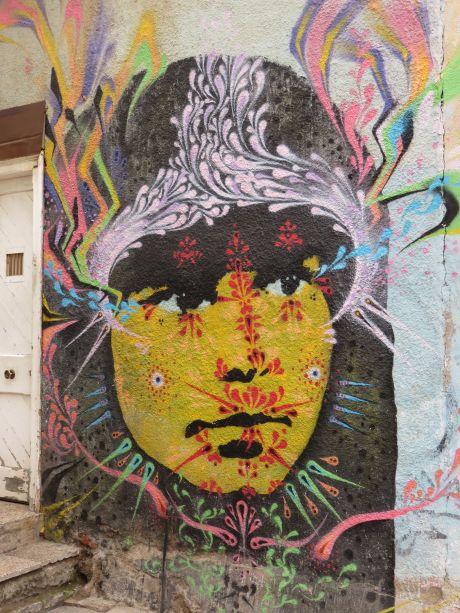 The evening began with Andrea’s own special Pisco Sour recipe (the best we’d had on the trip), small empanadas for appetizers, and conversations about where each of was from and where we’ve travelled. Although our four couples had been together for two weeks by this point, that evening provided insights into one another’s perspectives, some of which were impacted by the part of the country in which everyone lived. Susan and Tyler are from San Diego, CA. Sue and Bob are from Milwaukee, WI. Nina and Charlie hail from New York City and of course, Russ and I live in Orlando, FL. We represented different religions, philosophies and politics, but on this evening, we were just curious about life in Santiago and about one another. My thanks to Smithsonian Journeys for arranging such an enlightening evening with a charming, educated and culturally-astute host, who, by the way, turned out to be an excellent cook.
As exhausted and sated from our meal as we were, Russ and I had great respect for our final lodging. Located just four blocks from the local United Nations complex and in the middle of a stylish, gentrified neighborhood, the 295-room Hotel Atton Vitacura, built in 2012, obviously caters to politicians, businessmen and higher-end travelers who require safety and security. I have never seen this many ear-budded, cropped hair, serious-looking, dark-suited security staff manning a lobby. The lobby spoke of understated sophistication. 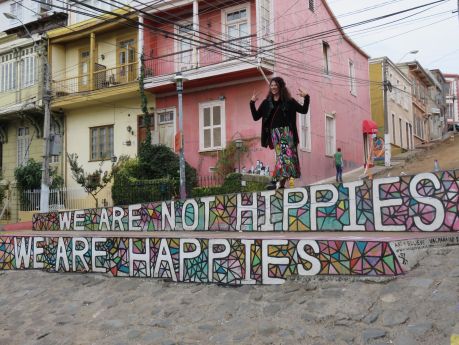 I’m a happy hippie on a Valparaiso side street. photo by Russ Wagner

Morning came too quickly. We were to meet in the lobby for a full day tour of Valparaiso and Viña del Mar. But first, breakfast in a large, modern dining room. The buffet included numerous fruits, granola, nuts and three types of eggs. Sure, they had the ever-present runny scrambled ones, but they also had hard boiled and fried over easy. There were quesadillas with cheese, guacamole, sautéed veggies, and so many freshly made breads I had trouble choosing. Best yet: the coffee. It was full-bodied and flavorful. An oversized espresso maker sat on a table for self-serve.
Valparaiso sprawls across the coastline of the Valparaíso Region, the country’s third largest metropolitan area. Legend has it that the impoverished working class would ask ship’s captains for any leftover paint with which to paint their homes, in exchange for services or labor. The paint wouldn’t be enough to cover a whole house, so the house could end up in three or four colors. Hence, Valparaiso’s evolution into the painted city. 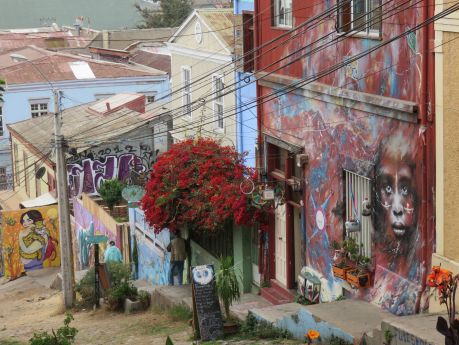 One of many steep narrow streets decorated in art in Valparaiso. photo by Russ Wagner

Our bus carefully wound up and down narrow, twisted steep streets that reminded me a lot of San Francisco, but without any seeming grid to the layout. From high above, it seemed as if the city were the stained palette of an abstract painter, with colors splashed in vivid relief. Influences were Deco, French, moderne or classic. Preserved or renovated structures butted against as many a paint-peeling, crumbling building. Houses are crammed together. Two-way streets barely accommodate one vehicle. Many streets are one-way.
The city is a living canvas for artists. No wall or walkway need be bare. Sure, some were of the level you might see from a street tagger, but the overwhelming majority of art represented the heartbeat of the city’s character. Bold colors of paint or mosaic tile. Rich themes of history or of the arts. We spent mere hours oohing and aahing. We were told it would take four days of solid walking to see it all. 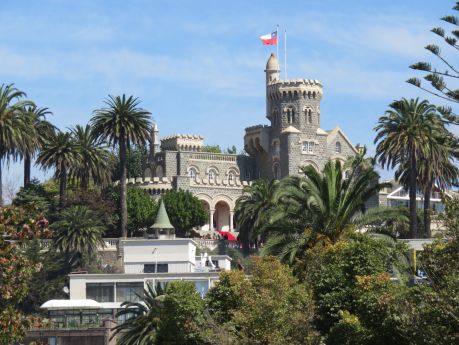 Lunch was on our own. Several of us were drawn to a quaint bistro called Divino Pecado Restaurant in the upscale community of Viña del Mar, where the booming, take-charge voice of Mario (a former New York resident from the Little Italy sector) welcomed us. We asked for the bill even before ordering, emphasizing that we were on a limited time frame (and by now figuring we know how to play this game). Even so, after our excellent meal and very slow service, we ended up six minutes late arriving to our meeting place. The meal was worth every questioning look we received on our arrival. Russ and I shared a small green salad. He had a beef and spinach ravioli dish he devoured. I savored a shredded lamb-stuffed pasta with the au jus ladled atop. The lamb had been cooked slowly for a minimum of six hours… a house specialty. The portion was enormous and even with our lunch companions each trying a piece, we couldn’t eat it all. The prices were reasonable. The fresh and creative culinary preparations were truly divine. 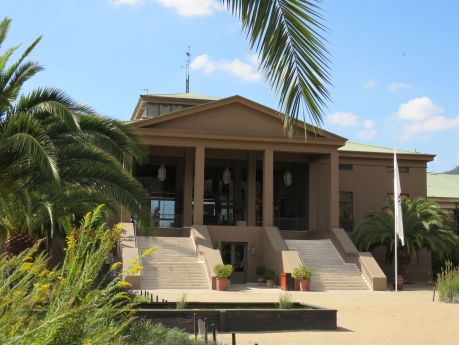 Forty-five minutes later, our bus pulled into Veramonte Winery. It’s either the largest wine producer in Chile or the second largest next to Conch y Toro, depending on who you ask. The owner formerly worked in Napa Valley, CA and bought this land to introduce wine making because the climate and soil is so similar to Napa’s. The vineyards we saw are for whites and pinot noir. Another of Veramonte’s vineyards are for carmenere and cabaret sauvignon.
We toured, tasted, played at blending some wines in teams of four, and then were given the bottle each team created. As much fun as this was, I was anxious to explore their locally-produced olive oils and spices in the gift store. For your info: these same oils and spices are available at the airport, but at much higher prices.
Our final dinner of our expedition was to SantaBrasa, a high-end steakhouse in the Vitacura area of Santiago. Though I’d been choosing mostly salmon on this journey, that night I was going for the house specialty: dry aged steak. Mine was perfectly cooked, juicy and tender. The wine, a Gran Tarapaca Reserva cabernet sauvignon from Valle del Maipo, Chile 2014 had just the right notes for the seasoned steak. Before dinner we had the option of pisco sours (of course) or bubbly and empanadas, but these weren’t just beef. Some were filled with chorizo or mushrooms or vegetables. Family styled dishes of mashed potatoes (with and without cheese), fresh lettuce, steak fries, rolls and bruchetta-styled salsa were passed around. Like each of the restaurants arranged by Odyssey Tours (the travel arm for Smithsonian Journeys), this one sought to provide dishes to satisfy each person’s dietary requirements. Dessert was either ice cream or crème de brulee.
Day 17: Breakfast and a tour of the Bellavista district before heading to Santiago Airport for our flights home. Bellavista is a shopping and restaurant area. Boutique shops. Lots of souvenirs. Restaurants were so crowded that we struggled to find one we could get in, and out of, quickly. Per usual, we had less time to shop and eat than it would normally take just to sit down for a meal. We settled for an Italian restaurant and asked immediately for our check. Some of our tour friends who sat inside (we were outside) had arrived earlier than us. Their food hadn’t arrived by the time we had to leave. Ours came, but let’s just say the hearty and tasty lunch we anticipated having to get us through the long journey home didn’t happen.
We arrive at the airport around 6 for our 10:30 pm scheduled flight from Santiago to Miami and then to Orlando. Here’s a tip you should take into consideration when flying LAN. I’ve explained previously they were late for each of our flights and the first one was cancelled altogether. The airline consolidates flights. Just because you have a confirmed seat does not mean you actually can get on that flight if it’s been consolidated with another flight. Therefore, always arrive extra early and get checked in. Just saying….
I could tell you about the disaster that could have occurred when the ticket agent (who spoke little English even though dealing with the North American customer line) didn’t give Russ and I our second boarding pass, but let’s just say that two angels, David Scott Palmer and his amazing wife Diane, saved our tired selves from maybe getting stranded yet again.
We arrived home safely and beyond exhausted. It’s now two months later and Russ and I are still processing all that we saw, learned, did. The hundreds of photos we took prompt imagery of places diverse and inspiring, but it is the people we journeyed with, those others we encountered, and the experiences not easily duplicated (thank you weather gods!) that made this a trip of a lifetime.
Part One: Buenos Aires
Part Two: Ushuaia and Cruising on the Stella Australis
Part Three: Torres Del Paine, One Of The World’s Most Beautiful Natural Wonders
Part Four: Puerto Montt and Puerto Varas, Chile, the land of volcanos, salmon and a lake that thinks it’s an ocean
Karen Kuzsel is a writer-editor based in the Orlando area who specializes in the hospitality, entertainment, meetings & events industries. She is a Contributing Editor-Writer for Prevue Magazine and is an active member of ILEA and MPI and is now serving on the 2015 – 2016 MPI Global Advisory Board for The Meeting Professional Magazine. Karen writes about food & wine, spas, destinations, venues, meetings & events. A career journalist, she has owned magazines, written for newspapers, trade publications, radio and TV. As her alter-ego, Natasha, The Psychic Lady, she is a featured entertainer for corporate and social events. karenkuzsel@earthlink.net; www.ThePsychicLady.com; @karenkuzsel; @thepsychiclady.
https://karenkuzsel.com/wp-content/uploads/2020/02/karen2.jpg 0 0 Karen Kuzsel https://karenkuzsel.com/wp-content/uploads/2020/02/karen2.jpg Karen Kuzsel2016-06-08 20:53:222019-12-17 22:31:38PATAGONIA: Part Five – Santiago, An Urban Awakening After Patagonia